'Intended for magnificent business', New Court has been the home of the London house of Rothschild for over 200 years. There have been four buildings called New Court on the site.

Nathan Mayer Rothschild (1777-1836), founder of the bank, first moved to New Court from Manchester (where he had founded Rothschild Brothers, a branch of his father's merchant house in Frankfurt in 1799). Following the death of his father-in-law, the wealthy London merchant Levi Barent Cohen, Nathan moved to London in 1808 where it was clearly his intention to establish himself as a banker.

St Swithin's Lane before the Rothschilds

St Swithin’s Church was founded in the 13th century, and the 'lane called Swityhinnes' was first recognised in about 1270. In 1666, the Great Fire of London destroyed most of the properties in the lane. The first mention of a house called ‘New Court’ appears in John Strype’s Survey of London in 1720.

In 1734 the lane was described as “a very handsome large place, with an open passage into it for a coach or cart. Here are very good buildings and at the upper end is a very good large house inclosed [sic] from the rest by a handsome pale”.

In 1809, Nathan Mayer Rothschild acquired the lease of No.2, New Court for £750, as a home for his family and as the centre of his London business interests. From 1779-1787, New Court had been the address of Acton & Winter, the legal firm that later became Freshfields. The property had an attached warehouse so Nathan could continue his business as a merchant; and was short stroll away from the bank of England and the Royal Exchange where Nathan would soon make his mark. The family moved into New Court in March 1809.

The building Nathan acquired was in good order, having “a cantilevered cornice. A covered colonnade on the south side with steps up to the front door, a brick parapet, cock-loft, garrets and flats.”

In 1815, Nathan signed a new 21-year lease for New Court for £175 per annum. This was the year of the Rothschilds' famous success in fulfilling the 'Waterloo' commission: news of the British victory at the battle of Waterloo is said to have reached New Court by Rothschild courier 24 hours before the news was received at Downing Street.

The Rothschild family moved out of New Court to a new villa in Stamford Hill in 1816. New Court remained the heart of the business, and it was at New Court in 1824 that The Alliance Assurance Company (later to become Royal & Sun Alliance) was founded at a meeting of Nathan and his associates.

New Court passes to the next generation

Nathan died in Frankfurt in 1836, where he had been attending the wedding of his son Lionel. On the 8th August 1836, Nathan's funeral cortege of 75 carriages left New Court. On his father's death, Lionel de Rothschild (1808-1879) became the senior partner in the new firm N M Rothschild & Sons, which he formed with his three brothers. Business continued steadily under Lionel; the traditional clutch of sovereign clients was extended, and railway loans became a strong feature. In December, 1846, the British Relief Association, established to raise funds for famine relief in Ireland, was organised in Lionel de Rothschild’s room at New Court.

A new building for a new age

In 1841, at the request of the City Surveyor, an engraved stone was added to the frontage of the building, bearing the name “New Court”. By 1850, 30-50 people worked for N M Rothschild & Sons and salaries at New Court ranged from £50 to £500 per annum. By the 1860s, the business of government loan issues had steadily increased and N M Rothschild & Sons remained the unchallenged leaders in this field. Lionel had entered the House of Commons in in 1857 as the first Jewish MP and it was, Lionel felt, time for a new building reflecting the firm's position in the world. In 1860, the first re-building of New Court began. 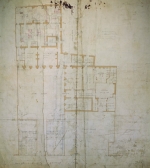 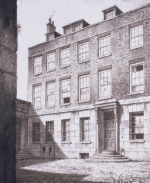