'Intended for magnificent business', New Court has been the home of the London house of Rothschild business for over 200 years. There have been four buildings called New Court on the site.

In 2008, it was decided to demolish and rebuild N M Rothschild & Sons Limited offices, New Court. The 1960s building was beginning to show its age and was too small to accomodate the entire staff.

A new landmark building was to be erected on the New Court site. The internationally renowned architect Rem Koolhaas and his practice OMA were chosen to create a New Court for the 21st century. OMA’s vision for the fourth version of New Court was inspired by the idea of ‘heritage in the City’. The inspiration behind the new design for New Court came from the Palazzo Vecchio, home of Cosimo l de’ Medici in Florence.

The Topping Out ceremony for the new building was in 2010; the fourth New Court was completed in 2011. The interior of the building includes many references to the company's history, and a new oak reading room for The Rothschild Archive.

Restoration of the church view

In building the newest New Court, the intention was not only to preserve the qualities of the historical context of the Rothschild site, but to enhance them. The new building is designed to improve the relationship between the development and St. Swithin’s Lane by acknowledging the historical enclosure of the lane.

The site of Christopher Wren’s historically significant St. Stephen Walbrook has been neglected over three centuries of architectural development and was largely hidden from view. The rebuilding of New Court has reinstated the 18th century visual connection between St. Swithin’s Lane and the Church.

"The exterior as well as the interior of the new building has been carefully conceived to create an inspiring building for Rothschild that establishes a new dialogue with the City." Ellen Van Loon, Senior Partner OMA

"Rothschild has made a commitment to the City of London that has endured across six generations. The new New Court is of significant historical and architectural importance and continues this commitment." Tony Chapman, Rothschild project manager 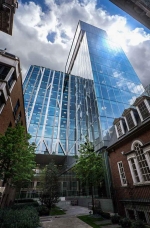 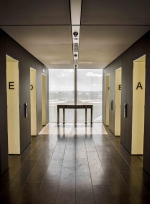