Mayer Amschel Rothschild (1744-1812) of Frankfurt laid the foundations on which his five sons and their descendants would build a Europe wide banking empire.

Mayer Amschel Rothschild and 'the House at the Green Shield'

Mayer Amschel Rothschild was born in 1744 in the Judengasse, in Frankfurt. Frankfurt was a major center of trade, with many bankers and wholesale merchants. After an apprenticeship in foreign trade and currency exchange in Hanover, he returned home in 1763, and became a dealer in rare coins. His coin business grew to include a number of princely patrons, and then expanded to include the provision of financial services to clients. In 1769, Mayer Amschel gained the title of "Court Agent", managing the finances of the immensely wealthy Elector of Hesse-Cassel. By the early years of the 19th century, Mayer Amschel had consolidated his position and began to issue his own loans.

The first place of business in Frankfurt was also the family home - at the House of the Green Shield in the Judengasse, where Mayer Amschel and his family moved in 1784. In 1796, Napoleon's troops attacked Frankfurt, accidentally setting the Judengasse on fire and destroying half of it, leaving 2,000 inhabitants homeless. The displaced Jews were allowed to live in the Christian part of the city for six months. Although the House at the Green Shield had not been damaged, Mayer Amschel took advantage of the relaxed city laws to rent space for all of his wares outside the ghetto, allowing his family full use of the house.

As a result of his succesful business dealings, Mayer Amschel amassed a not inconsiderable fortune and, in 1810, renamed his firm M A Rothschild und Söhne, establishing a partnership with his four sons still in Frankfurt, his son Nathan Mayer Rothschild (1777-1836) having already established a business in Manchester and London.

In 1795, after the Frankfurt city council abolished the status that prohibited Jews from owning property outside of Judengasse, Mayer Amschel Rothschild relocated his business premises to Schnurgasse and his warehouse to Trierischer Hof outside the Jewish ghetto. In 1809 he bought a building site in the northern part of the Judengasse which had burnt down in 1796. Mayer Amschel died in 1812, and his eldest son, Amschel Mayer (1773-1855), took over the management of what was now the Frankfurt House in the Rothschild banking business. In 1813, a year after his father’s death, Amschel had an office building erected at 146, Fahrgasse to house the banking business of MA Rothschild & Sons. The imposing building, in the classical style, stood at the corner of Fahrgasse and the Judengasse.

The Frankfurt house took a lead in the business of government bonds, while Amschel’s partners, his brothers Salomon (1774-1855) and Carl (1788-1855), travelled from court to court and congress to congress, making connections and negotiating contracts. Salomon and Carl eventually set up satellite Houses, in Vienna and Naples respectively, and continued to conduct major bond transactions on behalf of the Frankfurt House.

The Frankfurt bank was, according to a rare contemporary description, 'open plan' in its design: "He [Salomon] sits in his office in the midst of his clerks like a Padishah; below him are his secretaries, and around him may be seen a crowd of brokers, for ever coming and going. With a few words he dismisses each, for like a true business genius he knows at once what answer to give to every question, and what decision to arrive at on any business that may be laid before him for consideration... To speak to him privately on a matter of business is well-nigh impossible; everything in his office is done openly as in a law court."

Closure of the Frankfurt house

With the death of Amschel in 1855, the business passed to Carl von Rothschild (1820-1866) and Wilhelm Carl von Rothschild (1828-1901) as Joint Partners. By 1901, with the death of Wilhelm Carl, the Frankfurt bank’s last remaining partner, Frankfurt was no longer a significant financial centre. No family members in London, Paris or Vienna wished to move to the Prussian city, and the decision was taken to close the Frankfurt house. The remaining business was transferred to the Disconto Gesellschaft of Berlin, which established a Frankfurt office in order to handle its new business, and the liquidation of the Frankfurt business was managed by the London house.

Records of the Frankfurt business

Regrettably, most of the archives of the Frankfurt business were destroyed in the early twentieth century. As early as the 1860s, archives of the Frankfurt House had been stored in the 'vaults' of an outhouse at 25, Groβe Friedberger Strasse. These deposits later included business records of the Naples House which had been transferred to Frankfurt after the Naples house was closed in the early 1860s. However, upon the death of Wilhelm Carl in 1901, 1,404 hundred-weight of account books and banking papers were pulped.

Joseph Nauheim, a senior clerk at the London house, managed the liquidation of the Frankfurt business on behalf of Nathaniel, 1st Lord Rothschild. Thanks to the intervention of Nauheim, Dr Christian W. Berghoeffer, the former director of the Baron Carl von Rothschild Public Library in Frankfurt managed to rescue the oldest business letters and account books, the plan being to preserve these documents as a ‘closed collection’, under the seal of the Frankfurt Rothschild Library. However, this proposal met with the opposition of the then head of the Paris House, Alphonse de Rothschild (1827-1905), who had most of the papers transferred to the rue Laffitte and under the instructions of Neuburger, Baron Alphonse' right-hand man, many of the remaining papers of the Frankfurt business transferred to Paris were destroyed (a few legal papers relating to the Frankfurt house survived until 1940; when they were destroyed)

According to the then-current German regulations, correspondence and account papers, for the period of ten years prior to the liquidation of the business had to be retained in Germany; thus records for the period 1 January 1890 to 1901 were stored (most likely in the basement ) of the former Frankfurt office. However, these papers, were shredded in the spring of 1912. However, not all was lost. Nauheim took back to London some documents relating to the liquidation of the business, and documentation relating to the Rothschild family trust in Frankfurt, including the earliest Rothschild Partnership agreement, from 1810, and other historical papers. These can now be found in the archive collections of London house.

146 Fahrgasse: the Museum of Jewish Antiquities and the Jewish School of Domestic Science

The former Rothschild bank’s building at 146 Fahrgasse was lent to the Jewish community for various uses. One of the rooms at 146 Fahrgasse was used to display a collection of Judaica (later the Museum of Jewish Antiquities), under the auspices of the Israelite Community in Frankfurt am Main. The original banking offices of the family were preserved on the first floor, and many family heirlooms and pictures were added to the collection.

In 1902, the Judisches Haushaltungsschule (the Jewish School of Domestic Science), which had been established in 1897 to train Jewish school girls in ‘domestic knowledge’, moved to refurbished rooms at 146 Fahrgasse. In 1903, the premises were given to the school by the Rothschilds, rent-free.

In 1922, Adelheid (neé von Rothschild) (1853-1935), the wife of Edmond de Rothschild (1845-1934), with the aid of her mother Hannah Mathilde (1832-1924), Wilhelm Carl's widow, made a significant donation to the museum of Jewish antiquities, renaming it the 'Museum jüdischer Altertümer und von Rothschild Museums' in honour of Hannah Mathilde's 90th birthday. The collections were further enhanced when the merchant Sigmund Nauheim (1874-1935) bequeathed his Judaica collection to the Museum of Jewish Antiquities.

The museum was liquidated under the Nazis. In the pogrom of 9 and 10 November 1938 the Museum of Jewish Antiquities was looted and most of its holdings were destroyed or dispersed; in a 'rescue operation', the director of the city's historical museum saved iconic pieces by hiding them in his own collection, secreting them in cellars and bunkers in Frankfurt and the surrounding area. However, much was lost in air raids on the city.

After the end of the war, the Jewish Cultural Reconstruction Committee sifted through 'heirless Jewish cultural property' and in 1951 distributed it to Jewish museums and communities around the world. Objects from the Nauheim Collection ended up in New York and Jerusalem. However, some had remained unnoticed; in 1957 boxes with Hanukkah candlesticks from the Nauheim collection were discovered in a Frankfurt cellar.

The former Rothschild bank building at 146 Fahrgasse was destroyed during the Second World War. On the 50th anniversary of the November pogrom, the Jewish Museum was reopened on 9 November 1988 as a municipal museum in the historic Rothschild Palais at Untermainkai 14-15, formerly owned by Baron Carl Mayer von Rothschild (1820-1886). 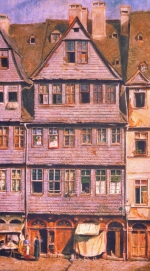