In October 1806, Nathan Mayer Rothschild (1777-1836) married Hannah Barent Cohen (1783-1850). Her father, Levi Barent Cohen came from a family of rich linen merchants and had moved to London from Amsterdam in 1770 where he achieved some standing as a merchant. In late November 1806, Hannah went to Manchester to share her husband's home. Nathan was well established in a community made up of merchants, textile manufacturers and his own staff. They embraced Hannah wholeheartedly. Hannah took part in the work of the business, dealing with correspondence and orders and signing cheques on behalf of the firm. Hannah and Nathan had seven children and lived at Stamford Hill and later at Gunnersbury Park. Hannah died at Gunnersbury in 1850, after collapsing while playing with her grandchildren. She was buried alongside her husband at the cemetery of the Great Synagogue, identified as Baroness de Rothschild.

The portrait depicts the daughters of Sir Anthony de Rothschild (1810-1876), second son of Nathan Mayer Rothschild: Constance (1843-1931) later Lady Battersea, and Annie (1844-1926) later Mrs Eliot Yorke. This fine portrait was painted by the Victorian artist, James G Middleton in 1860. It shows Constance and Annie near their home at Aston Clinton in Buckinghamshire. Constance and Annie were noted for their public works. They encouraged their father to support local schools in Aston Clinton, where they both taught, and they later embraced various philanthropic causes including temperance, prison reform, education, and Jewish women's charities.

On February 6th 1907, (Nathaniel) Charles Rothschild (1877-1923) married Roszika von Wertheimstein (1870-1940) in Vienna. The couple honeymooned in Venice. Charles Rothschild was the younger son of Nathaniel, 1st Lord Rothschild (1840-1915) and Emma, Lady Rothschild (1844-1935). A dedicated naturalist, Charles met his Hungarian-born wife Rozsika von Wertheimstein (1870-1940) on a butterfly-collecting trip in the Carpathian Mountains. Rozsika was a Hungarian baroness, a descendent of one of the wealthiest Jewish families in Europe. She was born in Navgarad (now the Romanian city of Oradea), the daughter of a retired army officer, Baron Alfred Edler von Wertheimstein. Rozsika, one of seven children, was fierecely intelligent, multi-lingual and a champion lawn tennis player in Hungary. Charles and Rozsika had four children, Miriam Louisa Rothschild (1908–2005), a natural scientist, Elizabeth Charlotte Rothschild (1909–1988), (known as 'Liberty'), Nathaniel Mayer Victor Rothschild (1910–1990), (the scientist, later to become Victor, 3rd Lord Rothschild) and Kathleen Annie Pannonica Rothschild (1913–1988), (known as 'Nica', later Baroness Nica de Koenigswarter, who found notoriety as ‘the Jazz Baroness’). The family mainly lived at their estate, Ashton Wold in Northamptonshire, and the family also maintained a London house, Arundel House, Palace Green in Kensington.

Please note that these portraits are not publicly accessible. 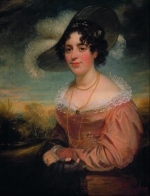 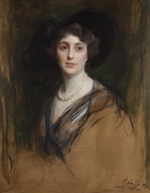