'Intended for magnificent business', New Court has been the home of the London house of Rothschild for over 200 years. There have been four buildings called New Court on the site.

The second New Court: a 'palazzo' for business

In 1865 the new building was completed in the style of a grand Italian ‘palazzo’ to the design of Thomas Marsh Nelson, of the firm Nelson & Innes. Nelson had already worked on Lionel de Rothschild's London house at 148 Piccadilly. The domestic feel of the old New Court was swept away in favour of a building more imposing and business-like, and an impressive iron and enamel sign was hung over the entrance.

"New Court - I mean the new portion which I had never seen, seems to me quite marvellous, and intended for magnificent business" Charlotte, Baroness Lionel de Rothschild, 1865

The City around New Court was changing rapidly, and in 1867, the Cannon Street extension of the South Eastern Railway opened. New Court was again the setting for global business - Lionel is remembered for his assistance to the British Government in 1875, helping his friend, Disraeli, secure the necessary sum to procure the Khedive of Egypt's share in the Suez Canal.

During the First World War Alfred de Rothschild constructed a special shelter after war-time air-raid attacks. In 1918 Alfred died (his brothers having pre-deceased him), and a new generation took over: Charles (1877-1923), Lionel (1882-1942) and Anthony (1887-1961) directed the Bank’s affairs from New Court. In 1919 the first gold fixing took place at New Court, on the 12 September.

The second New Court survived the London bombing of the Second World War. In 1941, a bombing raid destroyed the St Swithin London Stone, Salter's Hall (next door to New Court) and the church of St Swithin; New Court survived relatively unscathed. Much business was temporarily relocated to Tring Park (the former country estate of Natty) for the duration.

By the 1960s, the number of staff had increased to over 300, half of them women. The century old building was beginning to show signs of strain. Attempts were made to extend it upwards, but the building was looking dated, at a time when N M Rothschild & Sons were looking resolutely to the future. The time had come to re-build again. 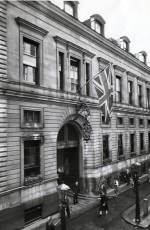 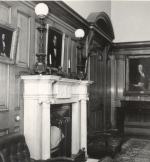