The Rothschild bank in Naples was established by Carl Mayer von Rothschild, who was sent to the Kingdom of the Two Sicilies in 1821 by his father, Mayer Amschel Rothschild.

By 1820, The sons of Mayer Amschel Rothschild (1744-1812) had established business operations in London, Paris and Vienna. In March 1821, in support of King Ferdinand I of the Two Sicilies, the Austrian army entered the Sicilian Kingdom and occupied Naples. This event created new business opportunities, and Carl von Rothschild (1788-1855) was sent to Naples in 1821, where he established C M de Rothschild & Figli to operate as a satellite office of the family business in Frankfurt.

From 1841, Carl occupied the Villa Pignatelli at Riviera di Chiaia with a spectacular view of Mount Vesuvius. The villa had been built for an English Minister, Sir Ferdinand Acton, between 1826 and 1830. It was set in full view of the river Chiaia, surrounded by beautiful countryside. It was neo-classical in style, and Carl added two floors to house staff and officials. It was from this base that Carl managed his business and entertained distinguished guests.

C M de Rothschild & Figli became the dominant banking house in Naples, arranging substantial loans to the Papal States, the Kings of Naples, the Duchy of Parma and the Grand Duchy of Tuscany. However, in the 1830s, Naples followed Spain with a gradual shift away from conventional bond issues that began to affect the bank's growth and profitability.

Closure of the Naples business

The year 1855 was one of considerable change for the Rothschild family with the death of the heads of both the Naples and German branches. Of Carl's three sons, Mayer Carl (1820-1866) and Wilhelm Carl (1828-1901), succeeded their childless uncle Amschel Mayer von Rothschild (1773-1855) in Frankfurt while Carl's son Adolphe Carl (1823-1900) reluctantly agreed to run the Naples branch.

The end of the Naples branch began when revolution broke out and Giuseppe Garibaldi captured Naples on September 7, 1860 and set up a provisional government. Because of the family's close political connections with Austria and France, the business was caught in a delicate position. Adolphe took temporary sanctuary in Gaeta with the Bourbon king Francis II of the Two Sicilies but the Rothschild houses in London, Paris, and Vienna were not prepared to financially support the deposed king. With the ensuing unification of Italy, after forty-two years in business the Naples house closed in 1863.

In 1960 the villa was acquired by the town of Naples. It is now a museum, Il Museo Principe Diego Aragona Pignatelli Cortes. 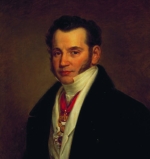