New Court is home to a collection of modern art pieces.

Londoners have recently been able to once again view the restored mosaic artworks by Eduardo Paolozzi installed at Tottenham Court Road underground station. Created in 1986, the mosaics are widely considered to be one of the most spectacular examples of post-war public art in the UK.

Rothschild at New Court is fortunate to have its own rather special collection of Paolozzi artworks, which were originally acquired in the late 1960s for the third New Court building.

The pieces are from a series of works collectively known as the Universal Electronic Vacuum Portfolio, a series of ten screenprints by Paolozzi, published by the artist in 1967 in an edition of 75, and printed at the Kelpra Studio, London. The pieces are visually striking, with their multi-coloured palette and angular, almost cubist forms and pop-culture references, typical of Paolozzi’s later style.

Their titles are equally enigmatic:

Sir Eduardo Luigi Paolozzi, CBE, RA (1924-2005) was born in Leith in north Edinburgh, Scotland, the eldest son of Italian immigrants. Paolozzi studied at the Edinburgh College of Art in 1943, briefly at Saint Martin's School of Art in 1944, and then at the Slade School of Fine Art at University College London from 1944 to 1947, after which he worked in Paris.

While in Paris from 1947 to 1949, Paolozzi became acquainted with Alberto Giacometti, Jean Arp, Constantin Brâncuși, Georges Braque and Fernand Léger. This period became an important influence for his later work. After Paris, he moved back to London eventually establishing his studio in Chelsea. In 1955 he moved with his family to the village of Thorpe-le-Soken in Essex, and established Hammer Prints Limited, a design company producing wallpapers, textiles and ceramics.

Paolozzi came to public attention in the 1950s by producing a range of striking screenprints and sculpture. Paolozzi’s graphic work of the 1960s was highly innovative. In a series of works he explored and extended the possibilities and limits of the silkscreen medium. The resulting prints are characterised by pop culture references and technological imagery.

Please note that the Paolozzis are not publicly accessible. 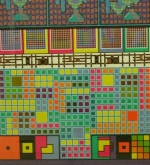 Detail of one of the Paolozzi screenprints