History of 'The Alliance'

The Alliance British and Foreign Life and Fire Assurance Company Ltd commenced business on 23 March 1824 and was based at New Court for its first two years. Nathan Mayer Rothschild (1777-1836) was the leading force in the founding of the Alliance.

Nathan Mayer Rothschild and Moses Montefiore resolved to form an insurance company to rival and circumvent Lloyds, with a larger share capital and a more influential Board of Directors.

The Company's prospectus claimed that the "extensive connections both foreign and domestic ... and large capital of their directors would provide 'the greatest individual benefit to the Proprietors." Between them, Nathan and Montefiore had important connections in the Jewish community. In a true alliance between share holders and policy holders, a condition of share purchase was that the holder would take out either fire insurance to the value of their subscription, or £1,000 in the life department. As a result of the efforts of the Alliance Company's Board, an Act of Parliament was passed abolishing the monopoly on marine insurance shared by Lloyds and the two Chartered Corporations (London and Royal Exchange). The Alliance instituted a new sister company, the Alliance Marine Assurance Company in 1824, for the purpose of carrying out marine insurance business, after objections from a Lloyd's underwriter, one of the Alliance's shareholders. In addition to marine, fire and life insurance the Alliance Insurance and Alliance Marine granted annuities, endowments for infants and benefits. N M Rothschild & Sons were the major shareholders and always had seats on the Board.

As actuary and head clerk, the company secured the services of Benjamin Gompertz, mathematician and Fellow of the Royal Society. His 1825 law of mortality showed, through the application of differential calculus to the calculation of life expectancy, that mortality rates increased in a geometric – and hence predictable – progression. Gompertz was no stranger. Married to Abigail Montefiore, Moses’ sister, he was very much part of the extended Rothschild-Montefiore family circle. In 1821 his appointment as actuary to another insurance company had been vetoed by them because of his religion. The Alliance, however, would not practice discrimination in any aspect of its business.

As well as the success of the Alliance’s share issue, the company was quick to succeed in attracting clients. Nathan was active in soliciting business from his many contacts. Even before the official opening, John Smith & Brothers in Manchester wrote to him on 18th March 1824:

"As soon as the Alliance Co. are prepared for business we shall send them an order for insurance, but in such an important town as this, you will doubtless have an active agent."

"My father desires me to offer you his best thanks for your kind recommendation and introduction to Mr. Rothschild and begs you will be so good as inform the gentleman, that although there are a great many insurance companies in this place, yet he has no doubt a great deal of business might be done, but previous to his making any application to that effect, he thinks it necessary that Down Smith & Co. should be regularly authorized. He therefore will be happy to receive any communication on the subject that the Alliance Company may think proper."

In 1924 N M Rothschild & Sons, as London agents of the government of Brazil, turned to the Alliance in its centenary year to help Brazilian coffee planters insure the vast amounts of coffee stockpiled in warehouses to prevent that year’s bumper crop from flooding the market. The Alliance’s expertise in international market places and fire insurance was proved, not for the first time, invaluable. Again, in the early 1930s, the Alliance was used on behalf of the bank to insure stockpiles of tin. Given the uncertainty of the times, not only was the insurance against the threat of fire, but also: "Explosion directly caused by Riot, Civil Commotion, Rebellion, Insurrection, Military or Usurped Power (other than that caused by Foreign Enemy) Strikers, Locked-out Workers or Persons taking part in Labour Disturbances, or Malicious Persons acting on behalf of or in connection with any Political Organisation."

Darker times were stalking central Europe, and in 1936 the Alliance Assurance Company were central to a bold attempt to save the Vitkovice steel works, owned by the Viennese branch of the Rothschild family, from falling into Nazi ownership. The strategic coal and iron works at Vitkovice, in the present day Czech Republic, had originally been purchased by Baron Salomon von Rothschild in 1843 to secure the manufacture of railway track to furnish the rapid expansion of the railways, not least those lines built by the Rothschilds in the Austro-Hungarian empire, Italy, France, Spain and Russia.

In an attempt to shift ownership into British hands at a time when the rise of Hitler was already recognised as a threat to Germany’s neighbours, the Rothschilds transferred their shares to the Alliance in 1936. For a time this arrangement stalled Göring’s ambitions for Vitkovice, but the partition of Czechoslovakia left the plant in German hands and it was turned over to munitions work for the Axis powers. In 1945 the new Czechoslovak government introduced legislation to nationalise the nation’s major industries: compensation for Vitkovice shareholders was negotiated by the Alliance with the Foreign Compensation Commission in 1951 and a final distribution made to shareholders alongside surrender of Alliance Vitkovice unit certificates in 1962.

Business concentration within the insurance industry in the second half of the last century brought the Alliance to merge with the Sun Insurance Company in 1959, and in 1996 this entity merged with the Royal Insurance Company to produce the Royal Sun Alliance. N M Rothschild & Sons Limited maintained its links with the Alliance, by advising Sun Alliance on this merger. Up until this date, members of the Rothschild family had maintained a continuous presence on the management board. In 2008, the Royal & Sun Alliance Insurance Group plc change sits name to RSA Insurance Group. 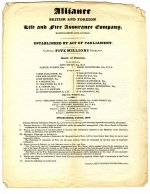 Prospectus for the Alliance British and Foreign Life and Fire Assurance Company established in 1824. Lionel de Rothschild (1808-1879) is listed as one of the Directors.