"We are like the mechanism of a watch...each part is essential..." Salomon von Rothschild to Nathan Mayer Rothschild, c.1818

On 27th September 1810, Mayer Amschel Rothschild (1744-1812) and three of his five sons, Amschel (1773-1855), Salomon (1774-1855) and Carl (1788-1855), became partners in a new firm, Mayer Amschel Rothschild & Sons. Two of the five sons were not party to the first partnership agreement in Frankfurt, although they signed the subsequent ones. Nathan Mayer Rothschild (1777-1836), founder of the British branch of the family business was already in London, having established his business there by 1809; James, the youngest of the brothers, who went on to found the French business, entered into the partnership when he came of age.

Mayer Amschel believed that forming a partnership would sustain a strong family business into the future, a belief that proved to be correct. The agreement ensured that the reputation that Mayer Amschel had built up for himself, through a lifetime of innovative trading, could be passed on to the next generation. By remaining true to the principles and rules of the partnership and by staying in close communication, the brothers went on to create a business that has remained at the forefront of global finance.

The formal structure of the partnership agreement survived into the twentieth century, though the family business subsequently adopted more sophisticated corporate structures. Profit sharing was built into the agreement. Mayer Amschel intended that his sons should share out the profits of the partnership, ensuring that the brothers were committed to the well-being of each other, and the partnership as a whole.

Rothschild women played an important role in providing advice and using their social connections to promote the business. They were, however, not able to formally join the partnership to ensure that no sons-in-law could lay claim to a controlling interest in the business. 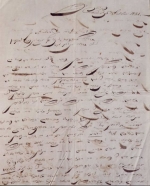 Letter in Judendeutsch written between the five brothers