A translation of the text of the first Rothschild Partnership agreement made the 27th day of September 1810, in Frankfurt-am-Main, is reproduced below.

Be it known by these presents to all those who find it
necessary and useful to know this, that a trading company
has been brought into being between those Jewish bankers of
this place, Mr. Meyer Amschel Rothschild and his two longest
married sons, namely Mr. Amschel Rothschild and Mr. Salomon
Rothschild, and furthermore in the same company there are to
be various changes made effective among the present partners
hereafter mentioned and belonging to this trading company
for themselves and their heirs, and therefore the following,
sincere and well-balanced new company agreement has been agreed,
concluded and recorded, not to be revoked.

I. their present trading company reckoned from the date
herewith recorded can continue unrevoked for Ten years following
one upon the other and

II. the present trading funds, no matter in what form they
exist, in goods, outstanding debts, mortgages, bills of exchange,
bonds or cash - with no exception thereof whatsoever - should
belong to the aforesaid partners singly and collectively according
to the proportions hereafter to be specifically determined
for the sharing of capital and profit within the company, being
one single property, and no claim thereto can be made by anyone
else whatsoever. No less do the partners of this firm acknowledge           collectively and severally

2. Mr. Amschel Rothschild holds specifically the sum of
One Hundred and Eighty-Five Thousand Gulden at a rate
of 24 viz. f.185,000 as special trading capital,

3. Mr. Salomon Rothschild holds specifically the sum of
One Hundred and Eighty-Five Thousand Gulden at a rate
of 24 viz. f.185,000 as special trading capital,

4. Mr. Callmann Rothschild however holds specifically the
sum of Thirty Thousand Gulden at a rate of 24 viz.
f.30,000 as special trading capital, which sum the three
first company partners as partners in the previous
association have secured and the latter partner namely
Mr. Callmann Rothschild, has earned by special business
activity.

This trading capital serves to bring together in a partnership

IV. all partners, with the sole exception of Mr. Meyer Amschel
who expressly reserves the freedom to pull out at will during
the life of this company, all partners being unable to take
anything from the company outside the yearly profit and
administrative expenses.

Since the Partners
V. have all come to an understanding on profit sharing after
payment of trading expenses and have apportioned this in fair
amounts, they waive any interest return from their several
trading capital funds and are willing one and all to be
satisfied with the share of profits to which they are entitled.
They acknowledge and promise

VI. no less collectively and singly, that heretofore their
respected son and brother Jacob (James) Rothschild has secured
already a particular capital of Thirty Thousand Gulden at a
rate of 24 by his conscientious discharge of business entrusted
to him by the earlier company and also by his own efforts; also
that this capital of f.30,000 should rest in their business
and be kept for James till he comes of age, yet bear no interest
return, and that he himself, that is to say Mr. Jacob Rothschild,
should no less be taken into the business as a partner also
with the profit sharing to be defined below after attaining his
majority.

VIII. All the present partners retain the business firm,
whereby it is however otherwise taken as understood, that
not one of them can practice any business whatsoever, conduct
exporting trade or take money from the Stock Exchange without
the prior knowledge of the others.

IX. Inventory stock and balance-sheets for the new business
are not tied to any time, but should always be made up as
soon as business affairs permit.

X. Just as now Mr. Meyer Amschel Rothschild has alone with
the help of the Almighty laid the foundation for the present
firm's success by that energy of his,noticeable from his youth
onwards, by his business insight and by his tireless application,
continuing right into old age, and as he has thus created
success for the time being in his children, so it is indeed
most entirely reasonable, that he as the essential head and
present partner of the business reserves for himself various
things, in particular the casting vote in all business affairs,
and also by these presents wishes further to have reserved for
him the right, that is to say,

1. without exception and at will to withdraw from the business
even during the period of a contract in force, if he chooses
so to do,

2. to engage and to discharge as he pleases each and every
individual belonging to the staff of the business,

4. No less is the right reserved to dispose of his share in
the business after his departure from the firm or - and
may God delay it yet longer - after his demise and to
place it at the disposal of his sons as he wishes.

XI. Also Mr. Callmann (Carl) Rothschild and Mr. Jacob (James)
Rothschild are to put into the business as well what
future marriage gifts they receive from their father
and not take any interest return.

XII. In the event that one of the partners should die during
the period of a contract in force, they are severally bound
to support the business and its credit with the greatest
solemnity and in lieu of physical oath, in that, since after
numerous enquiries they are convinced of their probity, neither
their wives, heirs or the possible guardians of their children,
should - on the excuse that things always are so - demand sight
of the business books and correspondence, nor should they
hanker after winning, inventories of stock or manifestation
oaths, nor molest the business in any way at all with litigation,
but should be satisfied with the last balance-sheet to be laid
before them by the remaining partners and should look upon
the outcome of that as their one and only true share in the
money and the business; and, no less do the partners agree that,
if any one of them whatsoever should happen to perpetrate any
usurpation of office running counter to this well-balanced
business agreement, he shall be subject to a penalty of Twenty
Thousand Thalers at a rate of 24 to be paid within 24 hours
upon an initial court action, without any further prosecution,
for the benefit of the new house of correction in this place
and for the benefit of the Jewish Hospital and he shall not
be even just heard by any legal counsel before the actual
settlement of the same.

XIII. Since the firm's assets comprise partly goods and
partly outstanding debts, mortgages, bonds and bills of
exchange, of which much has already unfortunately ceased to
be ready money and has become base money, and since still
several other important items can still turn out the same,
it is self-evident, that in the event of a future distribution
or the demise of one of the partners , his heirs or the
guardians of his children cannot receive his, or their capital
in the company in cash, but can receive it only and exclusively
in stocks in the company as specified herein and they must
satisfy each partner or his heirs and guardians of his children
at the rate of his credit balance with non-liquid, bad and
lost trading stock, outstanding debts, bills of exchange,
mortgages and bonds.

XIV. Should disputes occur between the partners over the
interpretation of all this during the life of the present
company contract, contrary to all that is hoped, then like
thankful sons the partners are subject in advance to the
paternal judgement of Mr. Meyer Amschel Rothschild, and if -
but may God forbid it - Mr. Meyer Amschel Rothschild should
pass away before the contract expires, then they covenant
herewith to allow without recourse to court action all
disagreements to be settled by two unbiased arbitrators
chosen by the parties concerned, and, if need be, settled
by a chairman to be selected by the said parties; they also
covenant faithfully to observe in every respect the findings
of the arbitrators.

XV. Finally, the contracting parties renounce for themselves
and their heirs all and every conceivable objection, quibble,
expedient or legal device against this honest and well-balanced
partnership contract - no matter what names they may have -
and above all they especially renounce pleas on grounds of fraud,
deceit, persuasion, fictitious contract or mistake, in that
any form of agreement differing from what has been recorded
does not stand committed to general disclaimer, provided that
in general no specific partner heretofore contrive to restore
the previous condition, for any legal reason whatsoever,
and provided that in particular, in the event of a breach
entailing more or less than either of two equal parts, or in
case of such quibbles, expedients or legal devices as can really
only be devised by human wit, no particular partner should
with the greatest solemnity and in lieu of physical oath arrange
things so that any spiritual, temporal or statutory law should
protect one of them or his heirs against the conscientious
discharge of all obligations contained in the present contract
or against any renunciation. Furthermore, the present agreement
has been prepared in five copies, signed and sealed by all
partners; a copy has been handed to each one of them, just
the same as to Mr. Jacob (James) Rothschild.

Given in good faith and without menaces this 27th day of September 1810, Frankfurt-am-Main.

That the preceding partnership contract has been individually
signed and sealed in the presence of us, the Parish Clerk
and the two witnesses as signatories, after being most audibly
read aloud and approved by all contracting parties, as witnessed
in the partnership deed, that is to say, by Mr. Meyer Amschel
Rothschild the father, and by his sons Mr. Amschel Meyer
Rothschild, Mr. Salomon Meyer Rothschild, Mr. Calomon (Carl)
Meyer Rothschild, as well as by Mr. Meyer Amschel Rothschild
on behalf of his 4th son Mr. Jacob (James) Rothschild here
present, in witness whereof we give our hand and seal of official
office as do the witnesses, and furthermore do confirm that
this complete deed has been enrolled on page 42 of Parish
Council Minute Book II, and likewise signed by all the
contracting parties, and by us, the Parish Clerk and the two
witnesses, this 27th day of September 1810, Frankfurt-am-Main. 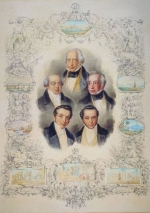 The Five Rothschild brothers by Raunheim

The Partnership Agreement of 1810