By the end of the First World War the South African mines which had been the leading customers of the Refinery decided to build their own refinery, partly to cut losses due to U-boat activity. Ironically, the idea of building a refinery in the Rand itself had been suggested by Charles to his father before the War but it was turned down. It was essential that the Royal Mint Refinery kept up with developments and following the introduction of chlorine refining in 1918 a Lodge-Cotterall plant was built, substantially reducing the loss of gold and silver from the chimneys. Other possible losses were reduced by such means as burning the sabots and aprons worn in the foundry, sweeping the roof and draining all the rain water into one settling tank. The mud cake from this last-named could yield gold at the rate of 15 troy ounces per ton.

After the death of Charles in 1923 the family interest was maintained by Lionel de Rothschild (1882-1952) and later by Anthony de Rothschild (1887-1961) Lionel was senior partner until his death in 1942 and it was during these years that the refinery had to combat the Depression and make considerable changes in plant and buildings. Anthony was concerned with these developments and the problems brought about by the demands of the Second World War.

In 1884, Alfred de Rothschild (1942-1918), a younger brother of Nathaniel, 1st Lord Rothschild, had acquired from the Metropolitan Board of Works a freehold plot in Cartwright Street, off Royal Mint Street, on the understanding that it would be retained for a period of eighty years for the express purpose of building and maintaining suitable ‘Artisans Dwellings adequate to accommodate at least 100 persons’ thus providing suitable flats for the workmen at the refinery. By the early 1930s it was realised that working conditions had changed considerably. Many of the French families had moved away by 1914, and after the First World War, British workmen preferred to live away from their place of work. In 1936 plans were drafted for the complete replacement of a large part of the Refinery in both Cartwright Street and the original frontage in Royal Mint Street (formerly Rosemary Lane). The new structure would provide Messing, Changing, Cooking, Rest Rooms and other facilities. A small number of flats would be built for senior employees to retain the spirit of the original terms of 1884. Over the next two years these plans were developed and put into effect with as little interruption to the work as possible.

Whilst all these changes were taking place the financial world was going through some traumatic changes. Gold and silver were subjected to pressures never dreamt of before the war as one country after another succumbed to economic crises. The foundry was in continuous production to keep pace with the demand. The loss of the work from the Rand was offset by the growth of the goldfields in West Africa. This work continued, in spite of the Depression in many other industries, even after 1931 when the United Kingdom went off the Gold Standard.

Since the beginning of the century India had imported large quantities of gold because it was traditionally preferred to any other asset. Indian agricultural problems in the late 1920s led to a reversal of the tide which accelerated after 1931 so that huge shipments of gold left India for the London markets continuously until 1939. In addition to refining and casting of the standard gold bars with a minimum assay of 995.0 parts per thousand pure gold, coin of assays such as 900.0 or 916.7 were melted together and cast in larger bars to provide the equivalent fine gold content of the market bars but diluted by the copper which was commonly the balance metal in gold coins. A straightforward melting operation made for greater convenience of handling and shipping. Thus thousands of sovereigns, eagles and Napoleons were sold for cash and disappeared into the melting pots.

In 1936 the Royal Mint had started production of Maria Theresa thalers, originally supplied by the Austrian Mint prior to their sale of the dies to the Italian Mint in 1935. This subsequently led to shortages of this anachronistic trade dollar in East Africa and the Red Sea countries, hence the call on the Royal Mint together with the French and Belgian mints to fill the gap with copies when the Abyssinian War started. Old coin was to be refined and processed into new coin and to cope with this novel demand the refinery not only undertook silver refining but installed rolling mills necessary to assist the Royal Mint keep up its production. One benefit of this contract was the small amount of gold present in the old silver coins which could be recovered by the new electrolytic methods. The rolling mills came into existence in time to provide more of the diversified products which were later required during the Second World War.

Victor, 3rd Lord Rothschild (1910-1990) became involved in the affairs of the refinery from 1935 and during the war years, when he brought his scientific experience and contacts to the benefit of the refinery. The onset of war meant greater diversification for the refinery, although the bullion work continued, especially gold, where small bars were in demand for India. The rolling mills changed to brass strip for armaments, cupro-nickel for shell cases and such items as thin copper strip for aero-engine radiators, the latter in response to the realisation that the only source of supply was Birmingham, the target of the enemy raids. A new manager was appointed in 1938, Bill Williams, a chemist who had already been joined by another university-trained chemist, Peter Steel. As the war progressed, so the demand for new products grew and it largely fell to these two men to find ways of producing the answers. Early in the war it was found that wire-plated materials were at risk because the main supplier was the United States and a substitute source had to be found. The solution was the opening of a wire-plating department.

Being on the boundary between the City and the East End, with the docks to the south and railways to the north, meant that the refinery was in the heart of the bombing area of the Blitz. However, the refinery was fortunate in that it was not hit by bombs, unlike its neighbours on all sides including the Royal Mint. Incendiaries were a problem but apart from some scorch marks on the roof there was little to show. The Fire Watch Logbook, preserved in The Rothschild Archive records the raids, the damage to surrounding areas and other information culled from the newspapers.

Work was frequently interrupted by raids and the watchers had to take note of warnings from the local ARP officers and then decide on the level of action to take; whether or not to send everyone to the shelters to close down certain operations. When the flying bombs started there was an interesting entry in the log for 13th June 1944 where the observer had described a plane on fire which exploded on impact, not having had a chance to unload its bomb-load. This entry was annotated a few days later ‘perhaps the first sighting of a flying bomb’. Later that summer it was noticed that the twin chimneys of Greenwich power station provided a very useful indication of which route the V1s were taking - either side of the chimneys there was nothing to worry about, but if it flew between then take cover, quick!

The end of the war naturally brought changes to the refinery. Those who had been away on war service returned and other ex-servicemen joined as new staff members. The range of products created in response to the demands of war had to be adapted to the needs of peace and, with this aim in sight, an agent was appointed. S. Goodfellow was experienced in this field and became involved in the export side and together with John Perry brought about the appearance of the Royal Mint Refinery at the British Industries Fair in Birmingham in the 1950s. Post-war governments were very much concerned with the promotion of exports and the stand at the Fair was maintained for several years.

In 1952 there was a celebration - a hundred years of activity, growing from a single purpose gold refinery to a variety of materials ranging from gold to brass, from bars of silver weighing 33 kilos or more to copper foil as thin as tissue paper, wires plated with all kinds of other metals, solders for industry, gold and silver grain for the jewellery trade, and metal screens for high volume printing.

Towards the end of the fifties many of the post-war problems were still in evidence. The crises of Korea, Suez and Hungary and conflicts in South East Asia and Israel continued to bring stress to the markets. The demand for small gold bars rose and fell as each crisis emerged and was then discounted or resolved. As other countries restored their industries so the competition grew and the diversity of operations created as part of the war effort now became a source of concern. A period of reviews starting in 1961 led to new accounting methods being introduced and schemes were considered whereby parts of the business might be hived off and sold to other more specialised firms.

The end of the Royal Mint Refinery under Rothschild ownership

Whilst much time and money had been spent on research and successful development, in the mood of the 1960s, the refinery was becoming an unusual area in which a merchant bank would be involved. The possibility of going back to a purely precious metals foundry but in a different location was investigated without success. In addition to the relationship with the Bank of England as an agent and the ex-officio chairmanship of the Gold Market there was also the responsibility of upholding the standards of the Market.

In 1965 the copper foil plant was sold to Brush Clevite who moved the equipment and some of the staff to Southampton. Two years later the remainder of the entire business was sold to Engelhard Industries Limited. The twelve months from October 1967 onwards saw a hectic period of activity. Everything had to be considered as to whether it went to the new works or was it to be scrapped or sold. The door stop in the bullion room was assayed because no one was quite sure where it came from and it could possibly have been an old coin bar. The wood blocked floor produced a worthwhile quantity of metal. Eventually the accumulated trappings of one hundred and fifteen years were all sorted out, people went off in various directions - some to Engelhard, some to New Court, some retired whilst others opted for redundancy - and the day came in early November 1968 when Spencer Richards became the last Rothschild employee to leave the building empty and close the gate on 19 Royal Mint Street.

(based on notes prepared by the late Mr Spencer Richards) 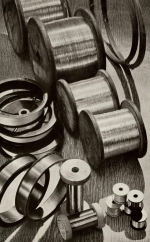