Custodial history of the collections

Despite the depredations of time and occasional bouts of over-enthusiastic destruction, a high proportion of the records of the London and Paris business houses have survived; however, business papers of the Naples, Frankfurt and Vienna business houses, and many private family papers have been lost.

A high proportion of the records of N M Rothschild & Sons have survived across nearly two centuries of continuing business, in good physical condition and carefully preserved order, looked after by generations of clerks in the Archives Department of the London Bank. It was Victor, 3rd Lord Rothschild, who, in 1978, with the encouragement of the historian J. H. Plumb, then Master of Christ's College, Cambridge, took the first steps towards putting the records of the London business in order so as to make them available to the research community. An Archivist was appointed and work began on sorting the records and systematising procedures for access. In 1999, the Board of Directors of N M Rothschild & Sons Limited, under the Chairmanship of Sir Evelyn de Rothschild, formally gifted the contents of the Archive Department of the London business to a newly established body of Trustees. Since 1999, the scope and scale of the Archive have gradually broadened as donations and deposits of further papers concerning the activities and history of the Rothschild family have been received.

The Rothschild Archive also holds collections of personal papers and material relating to the many and varied private interests of members of the Rothschild family. Private papers survive in varying degrees; many family members left instructions that personal correspondence and papers be destroyed after their death, and many of the estate papers of the great Rothschild estates have been lost. Further tranches of material were destoyed during the Second World War. 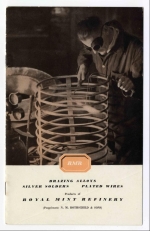 Brochure for the Royal Mint Refinery 1957