The collections of the Archive contain important sources for Jewish studies. Some of the most important collections are listed below.

View a gallery of highlights from our Jewish collections here »

The Rothschild Archive was established in 1978 to look after the records of a family recognised for the contribution it has made to world economic, political and social history. The collections reflect the banking, finance and merchant trading activities of the Rothschild businesses, together with the family's private interests in politics, science and nature, the arts and philanthropy.

Although records of the Rothschild business up to the date of 1945 are generally accessible to researchers, access to personal family papers may be restricted. For further information collections held by the Archive, Go to The Guide to the collections of The Rothschild Archive »

Important collections of records of the banking houses of the Rothschild Family in London and Paris survive, documenting not only their own histories but also a network of other businesses they dealt with. Series of correspondence with agents and other business houses include:

The Archive holds a vast series of letters in Judendeutsch written by the Rothschild brothers to each other between 1811 to 1868.  The correspondence, written in the German language and committed to paper in Hebrew letters, remains impenetrable to most people. The Archive aims to open them up to the wider world of scholarship. The letters date from 1811 to 1868, and Judendeutsch letters are scattered among some 142 boxes of correspondence in the Archive. No precise assessment of their number has yet been made, though an estimate suggests a total of some 20,000. In 1989 work began on the transcription of the letters. So far, some 2,500 letters have been fully translated.

The Rothschild family’s social status enabled them to forge close connections, especially through marriage, with other notable Jewish families that went beyond business. Extensive series of the Rothschilds’ own correspondence and other personal papers can provide an insight into Jewish social life and community issues. The Archive includes (in varying degrees) material relating to:

Family correspondence, photographs and other papers

The series of private business and personal correspondence written between members of the Rothschild family reveals much about their daily lives and their impressions and experience of the world around them. Collections of Rothschild family photographs include photographs, salt-prints and albumen prints, studio portraits and cartes du visite, depicting the Rothschild family, their relatives, friends and associates, including notable Jewish financiers and politicians. The Archive also includes material relating to family events such as weddings and funerals, including a collection of papers and commemorative albums for the marriage of Leopold de Rothschild (1845-1917) to Marie Perugia (1862-1937) in 1881, an event which was notable for the presence of the Prince of Wales at his first Jewish ceremony.

Material documenting Jewish emancipation is also to be found in the Archive, particularly with regard to the campaign by Lionel de Rothschild (1808-1879) to become the first Jewish MP to take a seat in the House of Commons. These include a small amount of correspondence, an illuminated address from the vestry of the Great Synagogue, London, to Baron Lionel Nathan de Rothschild on the occasion of his entry into the House of Commons, a City electors list, 1847 (a private record of votes cast in the 1847 election), and a large collection of contemporary printed material including tracts, pamphlets, and press cuttings together with printed prayers for Baron Lionel. For further information about these papers see The Guide to the collections of the Rothschild Archive here »

Other sources relating to the wider Jewish community include:

Brought up in the Judengasse in Frankfurt, Nathan Mayer Rothschild (1777-1836) and his brothers were imbued with a strong sense of the tradition of Zedaka, which places expectations on members of the community to work for social justice. The Archive holds a few papers (mainly printed material and secondary sources) relating to some of the institutions created or endowed by members of the Rothschild family. Administrative papers and records created by such institutions would naturally remain with the institutions or their successors, but in many cases where institutions are defunct or no longer in operation, few papers survive. The Rothschild Archive holds very few papers concerning support or patronage by the Rothschild family of individuals.

Collections of related material include:

Edmond de Rothschild and Palestine: Baron Edmond de Rothschild (1845-1934) was a strong supporter of Zionism, and from 1882, his most outstanding achievements were involved in responding to the threats facing the Jewish people in Europe in the late 19th century by supporting massive land purchases and underwriting Jewish settlements in Palestine and Israel. Edmond's large donations lent significant support to the movement during its early years, which helped lead to the establishment of the State of Israel. Until his death, 'The Benefactor', as he was known provided support for Jewish colonists, overseeing dozens of new colonies, and promoting the development of agriculture and industry.

In 1923 PICA (the Palestine Jewish Colonisation Association) was formed to oversee his affairs in Palestine. Administrative records created by the Paris PICA office were transferred to Waddesdon Manor by Edmond’s son James de Rothschild (1878-1957) after the Second World War. They contain correspondence, financial records, censuses, photographs and publications relating to the management of the settlements, land ownership, individual settlers, and the politics of Jewish settlement in Palestine, as well as industry, vineyards, and agriculture. These records are now held by The Archive, Windmill Hill, Waddesdon Manor, a separate institution to The Rothschild Archive London. See The Archive, Windmill Hill for further information about their collections. The Rothschild Archive London holds very little material on Edmond, except for some sundry papers relating to PICA.

The Archive has comparatively few records relating to the estates and private houses of the Rothschild family. Much of the archival material we hold relating to estates consists of photographs of the interior and exterior of properties, and gardens. Large quantities of records relating to the running ad administration of houses and estates are known to have been destroyed, as estates passed through the generations, or left Rothschild family ownership. Many of the Rothschilds requested that personal records be destroyed upon their death. The estates for which we hold the greatest amount of archival material are:

The Rothschilds were dedicated collectors, and they vied among themselves to develop the most spectacular collections. The great Rothschild houses were perfect settings for old master paintings, porcelain, silver and gold. Many of the great Rothschild collections were dispersed on the death of their owners and divided between subsequent generations. Others passed out of the Rothschild family by inheritance. Much was given to museums and galleries. Further information for provenance researchers concerning material held by the archive relating to artworks and objects may be found here »

The Archive collection also includes a number of artefacts of interest, such as a silver menorah believed owned by Nathan Mayer Rothschild (1777-1836), c.1800-1805, ceremonial pieces, medals and decorations awarded to members of the Rothschild family, and pieces of family jewellery. The art collection of the Archive includes family portraits and miniatures.

For further information about research using the Archive collections or make an enquiry, please contact The Rothschild Archive » 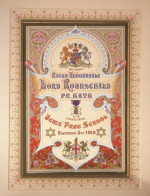