Photograph collections have been formed from the personal collections of various members of the Rothschild family reflecting their family and leisure interests from the 19th to the 21st century. As with any family, photography was used to record family events such as holidays in this country and abroad, winter sports, portraits of family and friends, members of the family at the time of the First World War, children at play, cricket, equestrian events, and family gatherings.

There are a considerable number of albums dating from the 1860s onwards which include portraits not just of the Rothschild family and their friends and associates but also members of British and European royalty. Many of these are studio portraits by photographers such as Alice Hughes, Desderi, Etienne Carjat, Hills and Saunders, Camille Silvy. There are also volumes which show exterior and interior views of Rothschild estates, including Mentmore Towers, Tring Park (by H. Bedford Lemere), Waddesdon Manor (Ferdinand de Rothschild's 'Red Book'), and Halton House (by Sam Glen Payne). Many photographs and albums will be found in the Named Collections, described in The Guide here » Read more about Ferdinand de Rothschild's 'Red Book' here »

Photography was one of Nathaniel's many interests and he published illustrated accounts of his travels in Europe, and endowed the Viennese Camera Club. Read more about the published photographs of Nathaniel von Rothschild here »

Robert was destined to play a major role in the management of the Paris House, de Rothschild Frères. He served as a lieutenant in the First World War, receiving two citations. The Archive has recently acquired an important collection of photographs and moving images, depicting family members and an important collection of rare and previously unseen images of the First World War. Read more about this collection here »

Of particular significance are the large number of photographs by Lionel de Rothschild (1882-1942). Comprising photograph albums, loose prints, and 733 autochromes (single and stereoscopic plate) the images show countries he visited while on holiday, such as Denmark, Egypt, Italy, Netherlands, Scotland, Spain, Switzerland, Tunisia. The subjects of his photography include his yacht the Rhodora, views of gardens showing plants and flowers, views of towns and buildings, landscapes, bird nests, a bull fight, portraits of family and friends, and scenes that inspired Lionel. The camera equipment he used has survived and includes three cameras made by Newman Guardia Ltd with their respective holders and cases. Read more about the Rothschild Autochrome Collection here »

The Archive holds photographs by W. & J. Piggott relating to the Rothschild sponsored craft exhibitions held at Leighton Buzzard Corn Exchange in 1875, an album of the Sassoon family in Scotland c. 1890s. and images (believed to be the Dutch coast), taken in the First World War and sent to Robert de Rothschild (1880-1946). The Archive also holds an album of photographs of Aston Clinton, taken by the Head Gardener, Mr Warren c.1900. Read more about 'Mr Warren's photograph album' here »

For further information about photographs in the collections, please contact The Rothschild Archive » 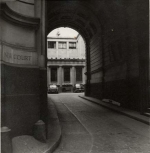 Autochrome by Lionel de Rothschild of a tiger at London Zoo c.1910