The Rothschild Archive has recently acquired a fine example of a delicate photograph by Anselm von Rothschild.

Salomon Albert Anselm von Rothschild (1844-1911) was born in Vienna. He attended the Gymnasium in that city and the University of Brno. He married his cousin Bettina on 22 March 1876 and their main residence was on the Heugasse. Albert served a Rothschild apprenticeship, and under Albert, S M von Rothschild & Söhne became banker-in-chief to the Austrian government and the family's industrial holdings were increased. 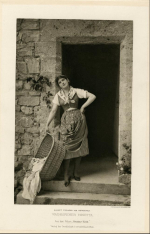