Estate ledgers and account books from the Château de Ferrières

The Rothschild Archive London primarily holds the business records of the Rothschild banking businesses. The Archive has few records relating to the estates and private houses of the Rothschild family; large quantities of private and estate records are known to have been lost. The discovery of these records will shed new light on life on the vast estate at Ferrières.

Château de Ferrières, the grandest of the Rothschild houses

James de Rothschild (1792-1868) was so impressed with Mentmore Towers, the Buckinghamshire estate of his nephew Mayer (1818-1874), that he is reputed to have told the architect Joseph Paxton, “Build me a Mentmore, only bigger”.

The design of Ferrières, Seine-et-Marne, which Paxton produced in 1859 was on the same lines as the English house, but on a much bigger scale with accommodation for one hundred servants and stables for 80 horses.  The kitchen was housed separately, and, in order that the food might arrive hot in the dining room, an underground railway conveyed it to the house.

Covering 4,000 hectares, the estate was large enough for a model farm to be maintained on it, and provided ideal territory for hunting.  Many distinguished guests visited during the shooting season, most notable among whom was Napoleon III who arrived on 17th of February 1862.  After planting a tree to commemorate his visit, he went shooting with James, returning in the evening to be entertained by the Paris Opera Chorus conducted by Gioacchino Rossini himself. As ambassador to Paris, Bismarck  stayed at Ferrières on more than one occasion, enjoying his time at the château so much that he later persuaded his King to make it the Prussian headquarters when the Prussian invaded Paris in 1870.

The last of the family to own Ferrières was Baron Guy de Rothschild (1909-2007). The house had not been used since before the Second World War, and Guy and his wife, Marie-Hélène, restored it and hosted several balls there, the most famous of which were the Proust ball and the Surrealist ball.  In 1975 they gifted Ferrières to the University of Paris.

Over the next few months the archivists will begin a detailed investigation of the volumes. 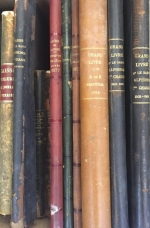