The Rothschild Archive has recently acquired from the Rothschild estate at Exbury a small collection of exquisite photographs of the flora of China, taken by the renowned plant hunter George Forrest, who was encouraged by the horticulturalist Lionel de Rothschild to seek out new specimens.

Exploring the glories of the natural world

From geraniums to begonias, the common plants that often adorn our gardens are rarely native to our region. We take them for granted, unaware of the great debt we owe to the naturalists and explorers who travelled around the world in search of these plants and brought back samples and seeds, along with fantastic stories.

Lionel de Rothschild (1882-1942), when not conducting business from New Court as a partner of N M Rothschild & Sons, could be found indulging his passions for motoring, photography and gardening. Indeed, he once described himself as 'a banker by hobby but a gardener by profession'. Gardeners, from the Rothschilds with their acres of manicured lawns, hothouses and parterres to the humble New Court clerks in their suburban terraces had an unquenchable thirst for new and ever more exotic species to grace their plots. Driven by an all-consuming passion, the plant hunters travelled around the world, facing challenges at every turn: tropical illnesses, extreme terrain, dangerous animals and often hostile natives. Even the plants themselves could be lethal. But these intrepid eighteenth-and nineteenth-century explorers were determined to find and collect new and unusual specimens, no matter what the cost.

George Forrest (1873-1932) qualified as a pharmacist, which introduced him to botany.  A small legacy gave him the opportunity to travel to Australia. On his return to Scotland in 1902, he began to work at the herbarium of the Royal Botanic Garden in Edinburgh and came to the attention of the Liverpool horticulturist and cotton broker Arthur Kilpin Bulley, who was sponsoring an expedition to southwestern China in search of exotic plants, particularly species of rhododendron, of which Yunnan has many.

Forrest made his first trip to Yunnan in 1904, accompanied by seventeen other plant collectors. In August, he arrived at the town of Talifu (Dali). He started setting up a base of operations and began to learn the local language. By the summer of 1905, he was ready to mount his first expedition to the northwest corner of Yunnan near the border with Tibet. He and his team of 17 local collectors stayed briefly at the French mission under Père Étienne-Jules Dubernard in the small town of Tzekou. Forrest and his team then collected numerous plants, herbarium specimens and seeds. However, the party soon met with tragedy. Foreigners had been targeted for death by the local Tibetan Buddhist lamas, and on their return to the mission, the party were attacked, with Forrest the lone survivor. This narrow escape did not discourage him from returning to Yunnan, and he eventually became perhaps the foremost collector of Yunnan flora, amassing hundreds of species of rhododendron, and other shrubs and perennials.

Forrest and the Rothschilds

From the early 1900s Lionel de Rothschild had been in contact with Forrest, supporting his work financially and taking a great interest in Forrest’s discoveries. In 1918 Lionel bought the Exbury Estate on The Solent, near Southampton, with a view to creating an ambitious garden. To obtain the rare and specialised plants he wanted to use, Lionel supported the expeditions of some of the most famous plant hunters of the day. He was especially interested in rhododendrons and azaleas, for which Exbury has become famous. Many of these plants came from the wildest parts of China, Tibet, Burma, Assam and the Himalayas. Seeds and specimens were sent back to Exbury for cultivation, and the plants were then used to produce new hybrids. Forrest was honoured with the Royal Horticultural Society's Victoria Medal of Honour in 1921, and the Veitch Memorial Medal in 1927, and was elected a Fellow of the Linnean Society in 1924. In 1924, Forrest discovered Camellia saluenensis, which formed the basis of the hardy Williams hybrid camellias, which are today grown in gardens all over the UK.

In 1932, George Forrest suffered a fatal heart attack  while hunting game in the hills near Tengchong. He was buried at Tengchong. Lionel was shocked, and suggested to the Foreign Office that Forrest’s effects should be brought back to the UK, at his own personal expense. Creating an important legacy in science, medicine, and agriculture, the pioneer plant hunters still inspire the scientific and environmental work of contemporary plant enthusiasts. 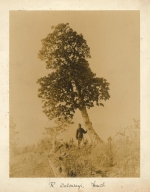 One of the photographs taken on Forrest's expeditions to China 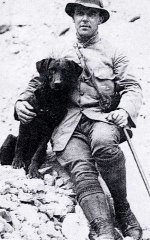