Gavel from the 'TSY Atmah'

The Rothschild Archive London has recently acquired the gift of an unusual brass and wooden yacht gavel c.1898 from the 'TSY Atmah', the steam yacht owned by Baron Edmond de Rothschild (1845-1934).

Brass and wooden yacht gavel c.1898 from 'TSY Atmah' , the steam yacht owned by Baron Edmond de Rothschild (1845-1934). The gavel measures 28.5cm x 14cm at the head, and is elaborately carved, with the inscription 'TSY Atmah 1898' and a decoration of an anchor on one side and a flag on the other.

Born in Paris on 19 August 1845. Edmond de Rothschild, the youngest son of James and Betty joined the Paris House in 1868 becoming a director of the Est railway company and other family concerns.  In 1895, he visited Palestine for the first time, and until his death, provided support for Jewish colonists, overseeing dozens of new colonies. In 1923 the Palestine Jewish Colonisation Association was formed to oversee his affairs in Palestine.

TSY Atmah saw long and distinguished service. Launched on the 5th May 1898, Atmah was a steel screw steamer 2 masted yacht built by Fairfield Shipbuilding & Engineering Co Ltd, Govan, at the Fairfield Yard, No. 403. The vessel initially sailed under the flag of France.

Atmah’s first owner was Baron Edmond, and the first port of register was Havre. The vessel was registered to Edmond's son, James Armand de Rothschild (1878-1957) in 1940. During the First World War, Atmah reported on Admiralty service, and in July 1940 was purchased by the Admiralty as a target yacht and attached to the Fleet Air Arm for flying training, serving from 1944 as an accommodation ship, ‘HMS Atmah’. In 1947, Atmah was sold to the Chagris Steamship Co Ltd (Goulandris Bros.), London, and converted to a passenger ship. Renamed ‘Aegean Star’, she sailed for a further for three years, until withdrawn from service. In December 1950 she arrived at La Spezia for breaking by Cantieri di Portovenere S.p.A.

The purpose of the gavel is not known; it may have been a commemorative piece, created when Atmah was launched. The gavel resided for many years in the Boardroom of Austin Trumanns Steel, in Dewsbury, West Yorkshire. 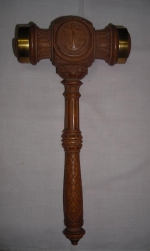 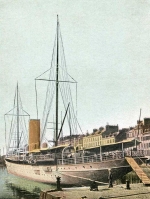