The Rothschild Archive London has been fortunate to acquire from Paris important catalogues of the collections of gold and silver work of Mayer Carl von Rothschild. The catalogues contain detailed descriptions of over 100 pieces, together with extremely fine high quality black and white illustrations.

Portfolio of Master Catalogues of the collections of Baron Mayer Carl von Rothschild, masterpieces of goldwork from the 14th-18th centuries. Edited by F. Luthmer, architect and director of Kunstgewerkerschule, Frankfurt am Main, published by Heinrich Keller: Series One, 1883 and Series Two, 1885.

Born in Frankfurt on 5 August 1820, Mayer Carl (Charles) von Rothschild (1820-1886) was the son of Carl Mayer Rothschild (1788-1855), founder of the Naples house. He studied at the University of Göttingen and in Berlin, eventually taking a controlling role in the management of the Frankfurt House after the death of his uncle Amschel. Mayer Carl acquired many personal honours such as the Duchy of Parma consulship in Frankfurt, Consul of Bavaria and Austrian Consul-General. He was a deputy in the North German Diet, a member of the German Reichstag and took a seat on the Frankfurt city parliament, becoming the first Jew appointed to the Prussian Upper House in 1871.

Mayer Carl married his cousin Louise at the London synagogue in Duke's Place on 6 April 1842. In Frankfurt, the couple lived at first on the Zeil, before acquiring a house on the Untermainkai and the Günthersburg mansion outside the city. Mayer Carl and Louise amassed an incomparable collection of over 5,000 works of art.

Ferdinand Luthmer, editor of the catalogues, studied architecture at the Berlin Academy of Architecture. After visiting Italy and France in 1871, he taught in Berlin whilst practising as architect. In 1879 he became director of the School of Applied Arts and the Museum of Decorative Arts in Frankfurt am Main, a position he held until his retirement in 1912. He wrote many works on art history, including a six-volume work on the architectural and artistic monuments of Wiesbaden. He was a member of the Römerbau Commission, which supervised the restoration of Roman Frankfurt in the 1880s.

These complete catalogues are an important source for scholars of gold and silver work, and provenance researchers. See Mayer Carl von Rothschild: collector or patriot? in The Rothschild Archive Annual Review 2003-2004 for more information about Mayer Carl and his collections. 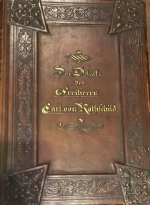 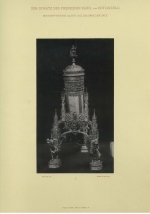 Plate I 'Trinkhorn' Drinking horn in ivory and silver