Metal stamps, punches and dies from the Royal Mint Refinery

Iron, brass and other metal

In August 2015, the Archive took custody of a two mysterious, extremely heavy boxes, formerly held deep in the vaults of the old New Court building. Closer inspection revealed them to contain metal stamps, punches and dies from the Rothschild run Royal Mint Refinery.

The heavy iron stamps were used to stamp Rothschild identification marks onto products (primarily gold bars) of the Royal Mint Refinery. The date of the stamps is uncertain, but they are likely to have been in use c.1900-c.1960. Some of the stamps are clealry recognisable from images of RMR gold bars which clearly bear them. The collection includes:

In 1848 a Royal Commission charged with examining the efficiency of the British Royal Mint recommended the separation of the twin roles of refining and coin striking. A recommendation of the Commission was that a refinery be leased to an external agency of the Royal Mint. The opportunity to manage a refinery in England was enthusiastically seized by Anthony de Rothschild (1810-1876), the second son of Nathan Mayer Rothschild and from 1852 until the late 1960s, the Royal Mint Refinery took a leading part in refining the world's gold output, as well as gold and silver sent by the Master of the Mint, and bullion for governments, banks, gold producers and bullion brokers.

Find out more about the Royal Mint Refinery here »

Stamps and punches from the Royal Mint Refinery 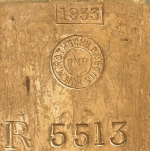