Memories of a vanished Rothschild estate.

The Rothschild Archive was fortunate to acquire a private photograph album of Mr Warren. This fascinating volume contains over 220 previously unknown private photographs of Aston Clinton, taken by Mr Warren. The album, compiled between 1896 and 1902 is a tantalising glimpse into his life over these six years.

The album contains Warren family photographs, recording the people, places and events that they held dear. Images of working life show Mr Warren and his staff with their horticultural triumphs, and activity on the estate through the seasons, such as hay-making. The album also includes some remarkable views of buildings and views in Aston Clinton, and the joyful celebrations for the Coronation of 1902. 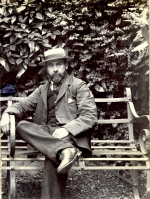