The growing of orchids is one of the many horticultural passions of the Rothschild family.

Orchids have been cultivated for more than two hundred years. In the 1830s, The Royal Horticultural Society had a glasshouse in Chiswick especially for orchids and they rapidly became favorites at horticultural shows and with wealthy collectors and growers. Under William Hooker, the first Director of the Royal Botanic Gardens at Kew, new species were introduced, and he encouraged exchanges of plants with amateurs and other gardens. The 6th Duke of Bedford gave his entire collection to Queen Victoria, who presented it to Kew 1844. Many members of the Rothschild family cultivated orchids in England and France, competing with one another and regularly exchanging specimens and growing advice.

A fascinating collection of papers concerning the cultivation of orchids on the Exbury estate of Mr Lionel de Rothschild (1882-1942), including receipt books, lists of plants, correspondence, catalogues and display cards from flower shows. A single file documents experiments in the 1920s to germinate orchids at the Rothschild Royal Mint Refinery in London.

These accessions compliment collections already held of private papers of Lionel de Rothschild (maintained in record series of the Rothschild bank at New Court) which include files concerning horticulture (XI/15). 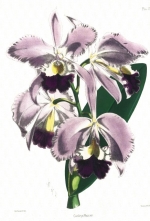