The Rothschild Archive London has recently acquired the gift of a beautiful rock crystal family seal.

Seals, bearing the Rothschild family crest would have been used for sealing family letters and documents. This 7cm long seal looks to be unused, so it is likely to have been a decorative piece.

Anselm Salomon von Rothschild (1803-1874), was the first of his generation to be enlisted into the ranks of the Rothschild family firm. His general education in Berlin university was brought to a fairly swift conclusion so that he might focus his mind more closely on matters of business. The family fears that he might pursue other careers no doubt stemmed from his many talents.

Anselm's introduction to business was in Paris, where he served as his uncle James's apprentice. He entered the family partnership in Frankfurt and married into the English House on 11 September 1826, taking as his bride Charlotte, the oldest daughter of Nathan. His father's Viennese House came under his complete control after the upheavals of 1848.

In common with his uncles, Anselm collected a large number of honorary titles, but, like his cousins, he was able to participate in political life, and in 1861 became a member of the Imperial House of Lords in Vienna. His contribution to Viennese life was prodigious: numerous medical, artistic and general social foundations owed their existence to his generosity.

Members of his family remembered Anselm's wit, imagination and amusing talk. His son, Ferdinand, thought that his father's collecting tastes were rather underdeveloped, but Anselm's Dutch paintings provided a valuable source of instruction for his children.

Anselm died on 27 July 1874. He left five large estates to his sons, including Schillersdorf, Beneschau and Enzesfeld. 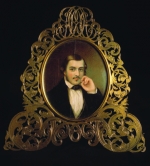