The Rothschild Archive has recently acquired a rare volume of delicate and captivating photographs of yachts and ships, taken by Nathaniel Mayer Anselm von Rothschild (1836–1905).

'Schiffsbilder' an album of heliogravure photographs of yachts and ships

Many members of the Rothschild family were gifted photographers, embracing the new technology to produce miniature works of art. Nathaniel Mayer von Rothschild (1836-1905) was born in Vienna, the son of Anselm (1803-1874) and Charlotte (1807-1859).

Nathaniel, and his brother Salomon Albert (1844-1911), ran the Viennese bank after the death of their father. Nathaniel's interests were much wider than banking. His botanical gardens, the Hohe Warte, were available for enjoyment by the public, and he also built for his own use a town house on the Theresianumgasse in Vienna. He kept his own stud and bred numerous fine horses including three Derby winners. In common with other members of his family, Nathaniel was a generous benefactor of many institutions; he founded a general hospital, institutes for the blind and deaf, an orphanage and a neurological clinic.

Photography was one of his many interests and he published illustrated accounts of his travels in Europe, and endowed the Viennese Camera Club.

This elegant volume, 30 by 38 cm was privately published by Friedrich Jasper (printed by Blechinger & Leykaufin) in Vienna in 1902. The hardcover, with a gold-gilt title imprint, bears a vignette showing both tradional craft and a steam yacht. The book contains 25 exquisitely rendered dark sepia coloured heliogravures. A heliogravure is a photographic printing process made up of two steps: a photochemical process that creates the intaglio surface where the photographic image is etched into a copper plate. The copper plate is used to print the image onto etching paper using inks. Heliogravures were noted for the extremely fine quality of the image produced, with the clarity of a photograph and the sublety of an etched engraving.

Only 40 copies of Schiffsbilder were produced, presumably as special gifts for family and friends from Nathaniel. The volume bears the printed inscription (in German) "These were made after photographs, which I took during my last trip on the 'Veglia' and a winter stay in Egypt" - Vienna, 1902 - N.R". The Veglia (an image of which is the first in the volume) was a yacht commissioned in by Nathaniel in 1895 from D & W Henderson & Co. in Glasgow. She was a 983 ton vessel with a length of 248 feet, elaborately decorated and equipped with large staterooms and ‘baths for a dozen guests’. On board the Veglia, Nathaniel had a purpose-built photography room.

The Archive is fortunate to also possess another earlier rare volume of heliogravures after photographs by Nathaniel (RAL 000/888). Entitled Reise-Erinnerungen (’travel memories’) this volume was privately published by Friedrich Jasper (printed by Blechinger & Leykaufin) Friedrich Jasper in Vienna in 1901. The volume contains scenic views of European people and landscapes, with additonal images taken in Egypt.

Together, these two important works contain some of the highest quality photographs printed in turn of the century Austria. 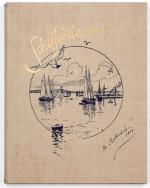 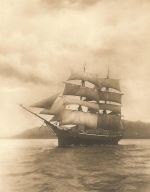