(Nathaniel) Charles Rothschild (1877-1923) was one of the early pioneers of nature conservation, and like his older brother (Lionel) Walter, 2nd Lord Rothschild (1868-1937), Charles was a passionate naturalist.

In May 1912, Charles held a meeting to discuss his radical idea about preserving natural wildlife habitats. This meeting led to the formation of the Society for the Promotion of Nature Reserves (SPNR), which would become the Royal Society of Wildlife Trusts, and signalled the beginning of a UK nature conservation movement that continues today.

Under Charles' supervision, the SPNR conducted the first ever national survey of wildlife sites in England, Scotland, Wales and Ireland. Questionnaires to landowners and local natural history societies seeking information about potential nature reserves were sent out from, (and returned to), the Rothschild bank at New Court in the City. The SPNR also despatched its members to carry out surveys on sites to establish their wildlife value. The resultant documentation for 284 sites (which were to become The Rothschild Reserves) were stored in Rothschild bank blue envelopes, and usually consist of the survey return, a map showing the area in question and relevant correspondence.

The SPNR worked hard to secure Government protection for sites across the UK they considered ‘worthy of preservation’. The SPNR became the Royal Society of Wildlife Trusts, and in the 1940s nature conservation made it onto the statute books with the National Parks & Access to the Countryside Act, 1949. There are now 47 Wildlife Trusts covering the whole of the UK, the Isle of Man and Alderney.

Go to The Rothschild Reserves Archive »

Greenham Common in Berkshire, (later to achieve notoriety as RAF Greenham Common) was one of the areas surveyed. The survey return described the land as 'typical heath and sedge vegetation, scenically beautiful and rich in brambles'. 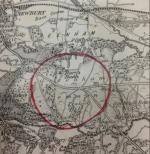