'The book that started it all': papers from the estate of Bettina Looram

This collection of papers includes numerous files from the Nazi administration relating to the collections of art looted from the Viennese Rothschild family.

This recent acquisition, generously deposited with the Rothschild Archive by Mrs Nina Burr, provides a valuable link in the chain of research into looted art and the collections of the Austrian Rothschilds.

The papers were just one element in a systematic exercise in expropriation that involved the Viennese business house of S M von Rothschild, real estate and works of art. Immediately after the Anschluss in March 1938 the Vienna business house was put into the hands of administrators and traded under the name of E von Nicolai. The real estate was occupied and variously used by the National Socialist regime. The works of art were earmarked for distribution among leading Nazis, Hitler included, and were stored in salt mines at Alt Aussee for the duration of the war.

And of course there is ‘the book that started it all’, in the words of Nina Burr, Mrs Looram’s daughter. The bound typescript list of the‘Sammlung Alphons Rothschild’, the inventory of confiscated objects that the late Mrs Looram used as the starting point in her campaign to recover the family’s art.

See The book that started it all: art archives and Austria in The Rothschild Archive Annual Review 2012-2013 for more about these papers.

File from the German Ministry of Economics dealing with Rothschild assets 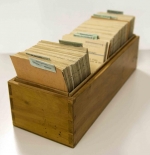 one of three boxes of index cards itemising Rothschild collections