Once Lionel had been elected, Russell introduced a Jewish Disabilities Bill, which would have overcome this problem. The Bill was passed in the Commons in February 1848. However, the Lords threw it out in both 1848 and 1849.Lionel was re-elected in 1849 winning by a two to one majority.

In the 1899 by-election caused by Ferdinand's death, Natty's son, Lionel Walter, 2nd Lord Rothschild (1868-1937) was elected for the Liberal & Liberal Unionists, unopposed. A Free Trader like his father, he served until 1910 when he retired from politics at the January 1910 general election. Lionel Nathan de Rothschild (1882-1942) then held the seat of Aylesbury for the Conservatives from 1910 until 1923. 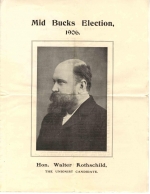