As many of us look forward to our summer holidays we delve into the history of travel through an item in the Archive collection: a passport belonging to Charlotte, Baroness Lionel de Rothschild.

History of the passport

Today we nearly always need our passports for international travel, but was that always the case? The earliest mention of an object we might recognise as a passport appears in the Bible, with a man named Nehemiah who was granted letters from the king requesting the governors of the lands beyond the Euphrates to grant him safe passage to Judah. In medieval times, documents were required to allow the holder to pass the 'porte', or gate, of a city without paying any local fees on his person or goods.  Individual cities often had reciprocal arrangements to waive such fees on each other's freemen and issued a 'pass porte' accordingly. In Britain, the earliest surviving reference to a ‘safe conduct’ document appears during the reign of Henry V, in an Act of Parliament dated 1414.  From 1540, the granting of travelling papers, (under the term 'passport')  became the business of the Privy Council. From 1794, the office of the Secretary of State took control of issuing passports, a function that the Home Office retains today.  Nevertheless, passports were not generally required for international travel until the First World War; before that time, possession of a passport  was confined largely to merchants and diplomats, and the vast majority of those travelling overseas had no formal documents.

The first modern British passport, the product of the British Nationality and Status Aliens Act 1914, consisted of a single page, folded into eight and held together with a cardboard cover. It was valid for two years and, as well as a photograph and signature, featured a personal description, which might include details such as "Forehead: broad. Nose: large. Eyes: small." Understandably, some travellers found this insulting.  Following an agreement among the League of Nations to standardise passports, the British blue passport was first issued in 1920.  In 1988 it began to be replaced by the burgundy-coloured European version. Anyone who has applied for a new UK passport since the middle of 2020 will now have the new post-Brexit dark blue passport, and today's passports will often feature intelligent security features.

Charlotte, Baroness Lionel de Rothschild (1819-1884), known as 'The never-to-be-forgotten Baroness', was a truly international Rothschild.  Although born in Frankfurt, her family divided their time between this city and Naples.  Her father, Carl von Rothschild (1788-1855), was head of the Naples House but both he and his wife, Adelheid Herz (1800-1853), were Frankfurters.  When Carl’s brother Amschel (1773-1885) died, Carl’s sons returned to take over the running of the Frankfurt business, which continued under their leadership until 1901. Charlotte married her English cousin, Lionel de Rothschild (1808-1879), in Frankfurt on 15 June 1836.  Only days after her marriage, her father-in-law, Nathan (1777-1836), died, and Charlotte's new husband found himself obliged to take over the responsibility of running the London business.  Charlotte settled in England where the couple’s main residences were at 148 Piccadilly and Gunnersbury Park, London.  The couple had five children and Charlotte remained close to the members of her extended family across Europe, visiting them often.

In February 1859 Charlotte, accompanied by her youngest daughter Evelina (1839-1866), travelled to Paris for the wedding of her cousin Gustave (1829-1911) to Cécile Anspach (1840-1912).  Her passport for this trip was issued on 4 February and signed by James Howard, 3rd Earl of Malmesbury in his role as Secretary of State for Foreign Affairs for Queen Victoria.  The document requests that Charlotte and her travelling companions “pass freely without let or hinderance, and to afford her every assistance and protection of which she may stand in need.”  The wedding took place on 9 February at the Consistoire Israélite de la rue de Notre-Dame-de-Nazareth; seventy-four members of the Rothschild family were in attendance.

Charlotte was an intellectual woman, linguistically gifted, and passionately involved in issues of education, not only for her own children but for the wider community.  She drew her friends from a wide social circle: Disraeli was devoted to her and the editor of The Times, John Delane, admired her political and intellectual skills.  She was a key player in several philanthropic activities, not least of which was the Jews' Free School.  Two of her published works, Prayers and Meditations, and Addresses to Young Children, stemmed from her active work at the School.  Many of Charlotte’s travels are recorded in her letters, and those of other family members, which remain an invaluable resource to historians. 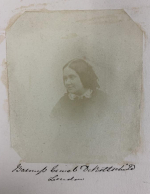 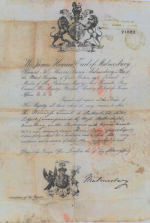