This month, continuing our delve into the archives of the Exbury Rothschilds, we look back 80 years to the golden age of opulent travel, with the Inaugural Coasting Cruise of the Queen Mary, one of the greatest passenger liners of the twentieth century.

From 14 to 15 May 1936, the Cunard White Star liner Queen Mary, designed for the transatlantic route, made her ‘Inaugural Coasting Cruise’, travelling a distance of approximately 470 miles from Southampton to the Lizard Peninsular and back.

Amongst those first passengers to experience the thrill of travelling on board one of the most elegant ships ever built, were Mr and Mrs Lionel de Rothschild, whose Exbury estate  lay close to the port of Southampton, the point of embarkation for transatlantic travel from the UK. Mrs de Rothschild kept scrapbooks, preserved in the family archives, into which she carefully pasted documents relating to the cruise, including the passenger list, embarkation card, itinerary and route map, all designed in the unmistakeable art deco style of the period. Lionel de Rothschild (1882-1942) and his brother Anthony (1887-1961) were Partners at New Court. In 1912, Lionel had married the French-born Marie-Louise Eugénie Beer (1892-1975) whose sister Nelly (1886-1945) had married Robert de Rothschild (1880-1946) in 1907.

Prior to her formal maiden voyage, an exclusive group was offered the chance to experience the new liner. On board were dignitaries of the Cunard White Star Line, John Brown’s shipyard and specially invited guests. The two-day cruise took place in the ship’s home waters and was designed to showcase the vessel’s capabilities and style to potential regular passengers. As well as sleeping in the grandest staterooms afloat and experiencing the finest cuisine, passengers enjoyed a programme of events including the Ship’s Orchestra, playing in the Main Lounge, a cinema screening of the latest British release, “Rhodes of Africa”, dancing in the Ballroom, deck games, swimming in the marble indoor pool and ‘Horseracing’ on the Promenade Deck.

The opportunity to travel on the new Cunard ‘Queen’ would most certainly have appealed to Lionel and Marie-Louise. As a young man,  Lionel had been fascinated with all things mechanical and before the First World War drove early automobiles across Europe and North Africa; many of trips being made to court Marie-Louise. Keen sailors, the family enjoyed long summer holidays touring Europe on Lionel’s yacht, Rhodora, commissioned in 1928, and the couple were no doubt eager to sample the grandeur of the Queen Mary’s magnificent public rooms.

The greatest liner of them all

The Queen Mary was designed for the weekly express service between Southampton, Cherbourg and New York to replace the ageing Mauretania and compete with British, German and French rivals on the Atlantic passage. Her keel was laid down at the John Brown & Company shipyard in Clydebank in January 1931, but work had to be halted in December because Cunard were in financial difficulties. The government eventually advanced a loan on condition that Cunard merged with its main British rival, the White Star Line. The 80,000-ton liner cost £3.5m (around £260m today). The ship was named after the wife of King George V, Mary of Teck. Legend has it that Cunard wanted to name the ship Victoria, but having been asked for permission to name the ship “after Britain’s greatest Queen”, The King replied that his wife would be delighted!

Built for speed, Queen Mary boasted a top speed of more than 30 knots.  The ship had a crew of 1,100, which was more than one for every two of her full complement of 2,100 passengers. Accommodation ranged from luxurious first class staterooms to modest third-class cabins. Berths were not cheap, costing £80 per passage (equivalent to around £4,800 today). Baths offered both salt water and fresh water. Much of the ship's interior was designed by The Bromsgrove Guild of Applied Arts, artists and designers associated with the Arts and Crafts Movement.  The stylish Art Deco interior incorporated woods from across the British Empire, and boasted two swimming pools, beauty salons, libraries, a children’s nursery, and even a kennel for the passengers’ dogs. There was a cinema, a music studio, a lecture hall, prayer rooms, and telephone connectivity to anywhere in the world. This was the first ocean liner to be equipped with her own Jewish prayer room, part of a policy to show that British shipping lines avoided the racism evident at that time in Nazi Germany. A turn around the promenade deck was equal to walking the length of Regent Street. A mural in the main dining room featured a map of the Atlantic and a crystal model of the ship which tracked its progress. However, Queen Mary's design was criticised for being too traditional, especially when compared to her French rival the S.S. Normandie.

The Queen Mary sailed on her maiden voyage on 27 May 1936. Supplies loaded for the voyage included 50,000 lbs of fresh meat, 50,000 eggs, 14,500 bottles of wine for the 50,000 meals served during each crossing, and 25,000 packets of cigarettes. Excited crowds watched the ship leave, a band played and an armada of vessels escorted her out of Southampton harbour. Fog prevented any hope of an Atlantic passage in record time and the ship was found to roll alarmingly; at its worst, you could walk along a corridor with one foot on the wall. Following remedial work to reduce the roll, Queen Mary captured the coveted Blue Riband for the fastest Atlantic crossing in August 1936; she lost the title to the Normandie in 1937 and recaptured it in 1938, holding it until 1952 when she was beaten by the new United States.

During the Second World War, the Queen Mary was converted into a troopship and ferried Allied soldiers, on one trip carrying some 68,000 men. Following the war, she was refitted and commenced passenger service with her sister ship, the Queen Elizabeth. The two ships dominated the transatlantic passenger transportation market until the dawn of the jet age in the late 1950s. By the mid-1960s, Queen Mary was ageing and, though still among the most popular transatlantic liners, was operating at a loss. She was officially retired from service, and left Southampton for the last time on 31 October 1967, sailing to the port of Long Beach, California, United States. Today, she is permanently moored as a tourist attraction, where you can experience a taste of travel in the ‘Rothschild’ style, and the glamour of a bygone age.

For further information and images from the golden age of the liners see the catalogue of the V&A Exhibition, Ocean Liners: Speed and Style (Daniel Finamore and Ghislaine Wood, V&A Publications, London, 2018) 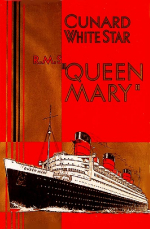