This month we explore a recent acquisition to the Archive collection, a small document that combines important Rothschild interests – a sound business proposition, the love of music, and ambitious creativity.

The company of composers and performers has been a repeating feature of Rothschild family history. Chopin, Liszt, Paganini and Rossini (a close friend of Lionel de Rothschild (1808-1879) and his sisters) came often to the Paris salons of James' wife Baroness Betty de Rothschild (1805-1886). Some were lucky enough to be taught by masters: Chopin gave lessons to Betty, her daughter Charlotte (1825-1899) and her niece Hannah Mathilde (1832-1924), Rossini to Louise (1820-1894), daughter of Nathan Rothschild (1777-1836), and Mendelssohn to her sister Hannah (1815-1864), who also learnt the harp from the great master, Parish Alvers. With such inspiration, it is little wonder that some ventured themselves to compose. Charlotte, Betty's daughter, published some piano pieces in the style of Chopin. Most prolific by far was Hannah Mathilde who, in the 1850s and 1860s, composed a series of piano pieces and lieder based on words by Victor Hugo, Alfred de Musset, Goethe and others - many at the request of singers of the calibre of Adelina Patti. Marriage brought further musical connections. Marie Louise (1892-1975) and Nellie Beer (1886-1945) both married Rothschilds and were both great-nieces of the composer Giacomo Meyerbeer.

At his country estate at Halton and in his London town house, Alfred de Rothschild (1842-1918) numbered Arthur Sullivan, Adelina Patti and Nellie Melba among his many musical friends and Liszt and Rubinstein graced his London parties. Alfred's contribution to music rested, not only on the six piano pieces, Les boutons de roses, which he wrote, one for each of the daughters of Mayer Carl von Rothschild (1820-1886) and his wife Louise (1820-1894); more lasting perhaps in the memory were the performances of his small orchestra at Halton, the players selected to be perfectly matched in height and in the shape of their moustaches, all conducted by Alfred himself with a diamond-studded ivory baton.

The Archive has recently acquired some correspondence, in French, in the hand of the chef d’orchestre, Walther Straram (1876-1933). The papers would appear to include a business plan for the 'operation and practical performance' of his renowned orchestra, the Orchestre des Concerts Straram, including costings and a draft programme of performance pieces, c.1918.

The plans outlined by Walther Straram demonstrate an ambitious creative vision grounded in a practical and well-thought out sustainable plan. The plans are accompanied by a covering letter, dated 15 October 1918, written from 27 rue de Belles Feuilles, Paris. The recipient of the letter is unknown, but the plans, together with costings for investment in the Straram orchestra were clearly aimed at wealthy and influential patrons and backers. It is tempting to speculate that the letter was written directly to members of the Rothschild family via a private secretary or the Rothschild bank in the rue Laffitte. The French Rothschild family, well-known throughout Paris for their patronage and support for musicians and artistes would have been ideally placed to consider supporting a new novel musical endeavour, and the clarity of Straram’s vision and his succinct and convincing plan would no doubt have appealed to the family’s business principles, whilst his ambition to present new contemporary works would have presented the opportunity to push the boundaries of musical excellence and achievement. Straram’s covering letter is short and to the point. He begins by clearly explaining his need for funds, and requests an appointment (possibly with the French Rothschild bank or a member of the family) to explain further his proposals.

“15 Oct 18. Paris 27 rue de Belles Feuilles. Sir, I send you herewith the agreed information, I was able to indirectly touch Mister Citroën, as well as Mister Rateau whom I think to see - as you will be able to realize, it lacks the capital of 96000f. to subscribe including 48000 to call only. Now, if you can set up an appointment for me, I would like to explain to you what my painful figures in the budget figures I am communicating to you relate to the operation and practical performance of this business. Please accept, Sir, the expression of my most distinguished feelings. Walther Straram”

The next section of the document concerns the programme of works Straram is going to present. A ‘Modern programme’ including works by ‘Debussy - The toy box - children's ballet; Honegger - Dance show; Le Fleur - Aucassin and Nicolette; Auric - The Lady of the Heart; A. Caplet - Country inscriptions; R. de Gourmont - vocal music; Pollet - Children's Paradise – ballet; D’Olonne - The One and the Other; Chabrier - L’Etoile; Satie - Portrait of Socrates; Darius Milhaud - The Prodigal Son; Ravel; R. Hahn - Christmas pastoral’, and a programme of  ‘Ancient Works’, including works by ‘Cambert – Pastoral; Mozart - Ascanio in Alba - Theater serenade; Carissimi – Jephthah; Pergolesis - The mistress servant; Purcell - Dido and Aeneas’. Straram then lists a series of ambitious collaborations between composers, musicians, vocalists and artistes for the coming year. Finally, having tempted potential backers with his creative programme, Straram then lists the precise figures (in French francs) needed to make his dreams reality; the plan includes provisions for revenue generation by rental of the 'theater' premises during 'non-playing' months:

It is not known whether the plan found favour with its intended recipient, but in the inter-war period, the Straram Orchestre des Concerts flourished and was at the centre of Parisian musical life, the melodious heart of a city of vibrant culture and an avant-garde artistic scene. 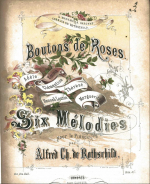