This month The Rothschild Archive welcomes a very fine portrait of a ‘Princess’ to its London Reading Room.  The Reading Room can lay claim to some remarkable works of art, each depicting a member of the family who has had an affinity with preserving Rothschild history. The works on show include portraits by Philip de Laszlo, Sergei Pavlenko, Bern Schwartz and now Bertha Clara von Rothschild by Ellis William Roberts, purchased at auction in Paris and gifted to the Archive by Baron Eric de Rothschild, Chairman of The Rothschild Archive Trust.

Bertha Clara von Rothschild was the youngest of the seven daughters of Mayer Carl von Rothschild (1820-1886) of Frankfurt and Louise von Rothschild (1820-1894), a daughter of Nathan Mayer Rothschild (1777-1836) of London.  She spent her childhood with her sisters at their homes at the leafy Günthersburg Palace, Bornheim, and the Bockenheimer Landstrasse in Frankfurt, where they were visited often by family members from across Europe.  Her father took a leading role in the management of the Frankfurt House in 1855 and was deeply involved in politics.  As a member of the German Reichstag he took a seat on the Frankfurt city parliament and in 1871 he became the first Jew appointed to the Prussian Upper House.  Her mother, Louise, was a pious woman who imbued the same qualities in her daughters, and Frankfurt became witness to their generous philanthropy where she established and endowed many charitable foundations.  It is hardly surprising that a contemporary described Bertha as having a strong intellectual streak, a trait she shared with her sisters.

Marriage to the Prince of Wagram

The couple set up home on the avenue d'Alma and in the château de Grosbois in Boissy-Saint-Léger, Val-de-Marne.  Bertha’s salons were enlivened by her charm and vivacity.  Proust recalled her in A la recherche du temps perdu.  A noted anglophile, Bertha imbued her country parties at Grosbois with the spirit of England.  She became involved with the history of the district and undertook an inventory of the library and archives of Grosbois, a testimony to her love of literature and her application to intellectual pursuits.  Indeed the château itself had an impressive library with over 3000 military and historic works as well as a collection of battle maps and plans.

A vibrant woman, Bertha’s life was cut tragically short when she died on 18 September 1903 aged just 41.  Over a decade later the Wagram family, like so many others, suffered loss during the First World War.  Bertha's only son, Alexandre, died in combat in May 1918 aged 35, during the fierce battle of the Chemin des Dames.  Captain Berthier, Captain of a Regiment of Chasseurs, was at the head of his company when he received mortal wounds in the fighting at Fort de Conde; he was killed by shell fire.  In his short life he had assembled an exquisite collection of modern art, including dozens of works by Sisley, Pissaro, Degas and Monet.  When his will was read it was found that he had bequeathed several of his most famous art treasures including no less than 17 Renoirs, to the French nation.

The portrait of Bertha now hanging in the Reading Room was completed in 1890 when she was 28 years old.  It has been carefully cleaned and reframed making her a striking addition to the art works displayed.  The artist, Ellis William Roberts (1860-1930), seems to have captured Bertha in a moment of wistful contemplation; her eyes are pensive and bright drawing the observer into her world and thoughts.  Unusual for the time, it is a rather informal portrait; Bertha is depicted wearing no jewellery and her attire has a modern feel about it.  As with all pastel works it has a soft, ethereal quality, her white Georgette style blouse contrasting with the smoky green background.  It is typical of the work of English artist Ellis William Roberts.  Roberts studied at the Royal College of Art, London and Academie Julian, Paris, where he studied under Bouguerreau and Robert Fleury.  It is perhaps through this link with Fleury that Roberts came to meet the Princess de Wagram, as Fleury was a favoured artist of the Rothschild family in Paris.  Back in London, Roberts was elected a member of the Royal Society of Portrait Painters in 1893.  He worked in pastel and oil and specialised in portraits of London Society women.  His sitters included the society hostess Lady Cunard, Prime Minister Arthur Balfour, members of the family of the Duke of Wellington, the Countess of Chesterfield, and many others.  Roberts exhibited sixteen portraits at the Royal Academy, London, from 1886 to 1902.  It is possible that whilst visiting her sister Emma, Lady Rothschild (1844-1935), who had a residence at 148 Piccadilly, Bertha strolled through the galleries of the Royal Academy and admired the work of the man who would one day capture her likeness for posterity. 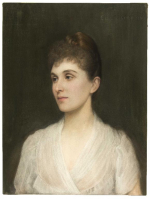 Pictures in the Reading Room of The Rothschild Archive