August 2020: Self-portrait of Charlotte, Baroness Anselm von Rothschild, with her husband, two of their children, and their nanny, 1838

This month we reflect on the arrival of the Rothschild family in Manchester and celebrate the life of Charlotte, Baroness Anselm von Rothschild who was born in Manchester, 213 years ago this August. A talented artist, Charlotte was the first of the generation of Rothschilds to be born in England, although she was later to make her home in the city of her father’s birth, Frankfurt.

Nathan Mayer Rothschild (1777-1836) was born in Frankfurt’s Judengasse on 16 September 1777. In the intervening 59 years, Nathan Mayer Rothschild, the name he never changed in spite of honours offered and declined, led his brothers to the pinnacle of the financial world. Nathan was the first of his brothers to found a branch of the family firm, settling in England in 1798, initially as a textile merchant in Manchester. In 1799, Nathan established Rothschild Brothers in that city as commission agents to coordinate the supply of British textiles to the continental market for his father's account. He was soon trading on his own account, and items in the Manchester warehouse, listed in his Stock Book, c.1805 include textiles and made-up goods such as arungos, baftaes, bandanas, books (probably of material), beads, cambrics, corals, cane table mats, emeralds, handkerchiefs, jacconets, ink, lappett sprigs, muslins, nankeens, pullicates, pearls, pockets, shawls, thicksetts, velveteens, vandykes, and wine.

In 1799 Nathan acquired his first Manchester premises. He is recorded as living in Downing Street, Ardwick Green to the east of the city in an elegant neighbourhood mainly occupied by merchants near the main route to London.  At this time his warehouse was probably in Brown Street. As business prospered, by about 1806 Nathan was living in Mosley Street with his warehouse directly behind the house in Back Mosley Street, a fashion which Nathan is credited with initiating.  Mosley Street was centrally placed and clearly becoming a fashionable location. Nathan was to live in Manchester for a decade, revolutionising the burgeoning textile trade and building up an impressive reputation as a successful and innovative merchant.

Nathan and his family

Nathan married Hannah Cohen, daughter of Levi Barent Cohen, in 1806, eight years after his arrival in England. Hannah was one of Nathan's closest associates, being consulted on business matters as well as taking care of the household and family. Nathan wanted his family to have all the benefits of English society, and Hannah, who enjoyed the same upbringing - lessons in music, art, literature, Hebrew and French - saw to it that her children were educated privately and the girls in particular studied music and art. In marrying Hannah, Nathan achieved a certain social standing in an instant, and she was not one to be held back from forging links with the great and the good to the benefit of their social standing and the business. In his will, Nathan ordered his children to follow their mother's advice, and to consult her before they took any decision of moment.  When he died, Hannah spoke of the loss of her best friend.

Charlotte de Rothschild (1807-1859), the eldest of Nathan’s children, affectionately referred to within her family as Chilly, was born in Manchester on 10 August 1807, bringing much joy to her father's employees and much anxiety when she became seriously ill as a baby. She was only to spend her earliest days in Manchester, for she grew up in London along with her siblings when her father moved to establish his finance house in the City of London in 1809. Charlotte resembled her mother Hannah physically; both were rather tall and elegant and both were intelligent, cultivated women who devoted themselves to the upbringing of their children.

Charlotte married her cousin, Anselm (1803-1874) on 11 September 1826 in Frankfurt, where they settled in a house on Neue Mainzerstrasse. The couple also had a home in Vienna, where Anselm became more closely involved with the management of his father's branch of the family firm. Over a period of twenty years they had eight children, seven of whom survived into adulthood. Charlotte was devoted to her offspring. Perhaps as a consequence of experiencing the loss of her son Mayer when he was only one, she wrote often to her mother about how extremely anxious she was when her children were ill.

A touching testament to Charlotte's dedication to her children comes from her son Ferdinand (1839-1898) who wrote in his memoirs:  "All my love went to my Mother, who indeed sacrificed the whole of her short life (we lost her in 1859) to the care and tuition of her young family." It is highly possible that Ferdinand, who was later to build the magnificent house and assemble the collections at Waddesdon, inherited his love of art and from his mother.

A talented and innovative artist, Charlotte’s accomplishments have remained largely overshadowed by those of other illustrious members of her family. It is not known when she began to study art, but the painter and art dealer Moritz Oppenheim wrote in his memoir that when she asked if he would take her on as a student, she informed him that she had previously studied with the French painter Baron François Gérard. Her correspondence with members of her family indicates that Charlotte was a dedicated painter. This portrait of Charlotte and her family dating from 1838 was one of her works, and it today hangs in the London premises of Rothschild & Co. The most ambitious work of art known to have been undertaken by Charlotte is a haggadah, the liturgical book used during the ceremonial Passover dinners, which she illuminated for her uncle Amschel, completing it in 1842. This piece is the earliest Hebrew manuscript documented as having been illuminated by a woman. For more information see ‘Charlotte 'Chilly' von Rothschild: mother, connoisseur and artist’ by Dr. Evelyn M.Cohen in The Rothschild Archive Review of the Year: April 2012-March 2013. 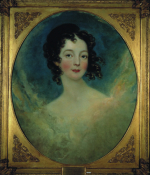