As England takes tentative steps towards a sense of normality, those of us at New Court may once again begin to enjoy the pleasures of an English summer season of entertainment including the much-loved ‘Proms’ concerts from the Royal Albert Hall.  This August, as London welcomes musicians and singers, we reflect on the personal friendship of the opera singer Adelina Patti and Alfred de Rothschild, a great patron of the arts.

The Proms, formally named The Henry Wood Promenade Concerts, (‘Promenade’ originally referred to outdoor concerts in London's pleasure gardens, where the audience was free to stroll around while the orchestra was playing) is an annual summer season of concerts, held predominantly in the Royal Albert Hall in central London. The Proms were founded in 1895 and are now organised and broadcast by the BBC. After a re-imagination of the format last year, The Proms is back in 2021 with six weeks of live music from 30 July until 11 September with 52 concerts over 44 days broadcast across radio, TV, and live concerts. The season is a significant event in British culture and in classical music, attracting artists and musicians from around the world. The collection of The Rothschild Archive inludes a cache of correspondence from a world-renowned performer, the soprano Adelina Patti, who wrote regularly to her friend Alfred de Rothschild.

Alfred de Rothschild: banker, connoisseur, and patron of the arts

Alfred (1842-1918), born in London, was the fourth of five children of Baron Lionel (1808-1879) and Baroness Charlotte (1819-1884). He spent his childhood in the family homes at 148 Piccadilly and Gunnersbury.  As a young man, Alfred attended King's College School, and subsequently Trinity College, Cambridge where he formed a lasting friendship with the Prince of Wales, (later King Edward VII). At the age of 21, Alfred became a partner at N M Rothschild & Sons at New Court alongside his brother Nathaniel (1840-1915), and later his younger brother Leopold (1845-1917).  It was here that he learnt the business of banking and made valuable contacts in European banking circles.

The management of private investments was the foundation upon which the Rothschild banking business was built, since Crown Prince Wilhelm of Hesse became the first Rothschild client in the 1760s, the beginning of an illustrious client list.  The firms managed the assets of, and provided credit to, a small and distinguished clientele, which included noted ‘celebrities’ of the day as well as Royalty and statesmen. Alfred's wide social circle formed a useful source of information for the business, and supplied a long list of private clients, including many from the world of entertainment.  The finances of Nelly Melba, Henry Irving, Arthur Sullivan and Adelina Patti all received a boost through the benign intervention of Alfred.  Many of these names can be found in the visitors’ book of Alfred’s extravagant country retreat, Halton House in Buckinghamshire.  Alfred had set about building a house in the style of a French chateau around 1880 and it was finished three years later. Alfred’s main residence continued to be his town house, 1 Seamore Place in London and both houses formed magnificent backdrops to his exquisite art collections.  He was a lavish host, and guests might be entertained by his personal orchestra or circus, of which Alfred was conductor and ringmaster respectively.  A lifelong patron of the arts, and a serious art collector, Alfred was a trustee of the National Gallery, (he also donated money to the National Art Gallery for acquisitions and advised on purchases) and he was a founder trustee of the Wallace Collection.  He took on the Gaiety Theatre in London when it ran into financial difficulties and managed it successfully in its great years. Despite lifelong hypochondria, Alfred survived his two brothers, and struggled on at New Court through the First World War which he had tried so much to prevent through his diplomatic efforts.

A friend of the Rothschilds, Adelina Patti - whom Verdi declared to be the finest singer he ever heard - was also assisted financially by the family, including the provision of a loan of 4,000 Fr from the Paris house during a tour of Argentina from 1888-1889. Born in Madrid of Italian parentage in February 1843, Adelina was raised in New York, and gave her first concert there at the age of seven.  She first sang at Covent Garden, London, in 1861 in Bellini's La Sonnambula.  From then on, her international career was assured.  As a bel canto coloratura soprano she had no rival.  She sang not only in England and the United States, but also as far afield in mainland Europe as Russia, and in South America as well, inspiring audience frenzy and critical superlatives wherever she went.

[We have received the excellent champagne that you were kind enough to send us; Adelina and I thank you very much, be sure that we will drink it to your health. I beg you to be so kind as to have this cheque cashed to my credit. Thanking you a thousand times in advance, I apologise for this indiscretion. We have booked an apartment at the Royal Palace Hotel, Kensington for Saturday June 8th. Adelina is due to make her comeback on June 10 or 11 at Covent Garden in La Traviata, she must therefore get along a few days before with the artists who are waiting, she sends you all her warmest regards, I join her and beg you to believe me your very deeply devoted… Ernesto”]

In search of privacy, Adelina bought a Welsh country house on the edge of the Brecon Beacons in 1878.  She named the house ‘Craig-y-Nos’ (The Rock of Night) and spent the next 40 years and £100,000 (several million in today's terms) turning it into a Gothic castle. At Craig-y-Nos she finally allowed herself to be recorded. Adelina made more than 30 disc gramophone recordings of songs and operatic arias for the Gramophone & Typewriter Company (the forerunner of EMI Records). Her piano accompanist, Landon Ronald, wrote of his first recording session with the diva; “When the little (gramophone) trumpet gave forth the beautiful tones, she went into ecstasies!  She threw kisses into the trumpet and kept on saying, 'Ah!  Mon Dieu!  Maintenant je comprends pourquoi je suis Patti!  Oh oui!  Quelle voix!  Quelle artiste!  Je comprends tout!'  Her enthusiasm was so naïve and genuine that the fact that she was praising her own voice seemed to us all to be right and proper.”  In one of the last recordings she ever made, Adelina recorded a piece written by a member of the Rothschild family, the Romance of Mathilde, Baronne Willy de Rothschild, a piece she often sang as an encore. It was also known by the name “Si vous n’avez rien a me dire”.

Adelina last sang in public on 24 October 1914, taking part in a Red Cross concert that had been organised to aid victims of the First World War at London's Royal Albert Hall, the home of The Proms. She died in September 1919 of natural causes.

Today, Charlotte de Rothschild (the daughter of the late Edmund de Rothschild (1916-2009)) is an internationally renowned lyric soprano who specialises in Oratorio and the Art of Song, singing in 22 languages. 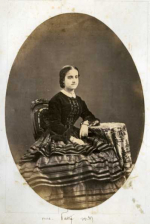