The company of composers and performers has been a repeating feature of Rothschild family history. Chopin, Liszt, Paganini and Rossini (a close friend of Baron Lionel de Rothschild and his sisters) came often to Baroness Betty’s Paris salons in the middle years of the 19th century. As we embark upon the festive season we look back to how the London bank staff were entertained at the turn of the last century.

Alfred de Rothschild(1842-1918) numbered the composer Arthur Sullivan and the opera stars Adelina Patti and Nellie Melba among his many musical friends.  Many of these figures became clients of the bank; Nellie Melba's fortune owed more to Rothschild investment advice than to her substantial international earnings. Alfred entertained magnificently at Halton in Buckinghamshire, and in London at 1, Seamore Place. He was a lavish host, and guests might be entertained by his personal orchestra which Alfred conducted with a diamond-studded baton. Alfred was  President of  The St Swithin’s Musical Society; Vice-Presidents were his brothers and nephews and Sir Arthur Sullivan. Members of the society included staff of the bank and their friends.

Concerts were held at St Martin’s Town Hall, Charing Cross, every second month. The programme for the first concert of the season, on 25th October 1899, reveals a packed evening with something to please everyone. The concert began with the rousing march ‘El Capitan’ by Sousa, performed by The Casino Orchestra. Highlights of Part 1 included the comic song ‘Tittle Tattle’ performed by Mr Wallis Arthur; a whistling solo ‘Il Bacio’ performed by Mr Chas. Capper, farmyard imitations, courtesy of Mr Harry Casrsdale, concluding with a song and dance by Miss Kitty Rayburn. Part 2 (after refreshments provided by the Chandos Hotel) included imitations by Miss Marie Dainton, more songs (both serious and comic), and a hearty rendition of ‘Rule Britannia’ The show ended with a ‘specially written descriptive piece ‘The battle of Dundee’.

The traditions of the St Swithin’s Musical Society continue today in the Rothschild Music Society which puts on regular concerts at New Court for bank staff, family and friends. The late Mr Leopold de Rothschild (1927-2012) played a substantial role in the musical world as a keen singer with the Bach Choir and its Chairman from 1976, Chairman of the Council of the Royal College of Music and of the English Chamber Orchestra and a Trustee of Glyndebourne. His niece, Charlotte de Rothschild, has become the family’s first professional singer. Fittingly, her recitals, frequently feature the songs of her ancestor Hannah Mathilde von Rothschild (1832-1924), an accomplished composer. 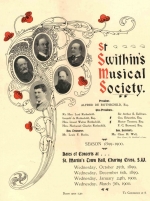 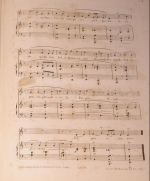