From their earliest days, global trade in goods and commodities was part of the daily life of the Rothschild businesses. As we approach the festive season with its vibrant colours and rich tastes, we reflect on the trade in exotic spices, dyes and textiles 200 years ago.

The East India Company was a British joint-stock company, formed to pursue trade with the ‘East Indies’ (present day Maritime Southeast Asia). Originally chartered as the ‘Governor and Company of Merchants of London trading into the East Indies’, the company rose to account for half of the world's trade, particularly in basic commodities, trading mainly with China and the Indian subcontinent. The company received a Royal Charter from Queen Elizabeth I on 31 December 1600. Wealthy merchants and aristocrats owned the company's shares.

During its first century of operation, the focus of the company was trade. Company interests turned from trade to territory during the 18th century as the Mughal Empire declined in power. The Company became a major military and political power in India, gradually increasing the extent of the territories under its control, ruling the whole Indian subcontinent either directly or indirectly via local rulers under the threat of force by its armies.

By 1803, at the height of its rule in India, the British East India Company had a private army of about 260,000 - twice the size of the British Army. Company rule in India lasted until 1858, when, following the Indian Rebellion of 1857, the British Crown assumed direct control of the Indian subcontinent. The Government of India Act of 1858 removed the Company as rulers of India, and the Company's armies, territories, property and powers passed to Crown rule.

As early as 1799, Nathan Mayer Rothschild (1777-1836) began to import and distribute Indian goods, and an ‘India Goods’ book, preserved in the Archive records dealings in cloth, indigo, spice, coffee and cotton between 1807 and 1812. Nathan is also reported to have dealt with the East India Company in connection with the famous ‘Waterloo Commission’, the contract from the British Government to supply Wellington's troops with gold coin in 1814 and 1815. In 1834, Sir Thomas Fowell Buxton wrote to his daughter recalling the dinner where Nathan told him of an occasion “when I was settled in London, the East India Company had 800,000 lbs of gold to sell.  I went to the sale and bought it all.  I knew the Duke of Wellington must have it… that was the best business I ever did.” Whilst no evidence exists that Nathan held East India Company shares, he did recommend the son John Roworth, his ‘Principal Clerk’for enlistment as a Cadet with the Company in 1818.

In 1815, ships sailed into London from across the globe, carrying rare and exotic cargoes. The East India Company would regularly send out printed lists containing details of inbound shipments, quantities and prices. This example, dated 30 June 1815 was sent to N M Rothschild for information by the London firm of Ripley, Wiss & Ripley, East India merchants and brokers, based in Cannon Street, a short stroll from New Court.

Goods (in various qualities) of the East India Company declared for sale included:

The list also includes ‘Privilege and Private Trade Goods’. These were private cargoes of officers and servants of the Company that were carried on the Company’s vessels, the officers paying the Company for the privilege. The goods are many and varied and include: 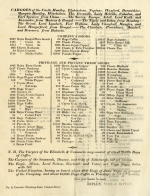