As we approach the festive season, we look back to the origins of the sending of cards as Christmas tradition, (started by one of the United Kingdom’s earliest archivists!), and feature a gallery of one hundred years of seasonal cards in the collection of The Rothschild Archive.

Sending Christmas cards is a tradition familiar to most with and although for many people e-cards and social media have taken over from the classic paper cards, people still love to send and receive seasonal good wishes. Over the years, the Rothschild family and businesses have embraced this custom to send festive wishes to friends, thank clients for their custom, remember business contacts and to promote general goodwill.

One of the earliest known examples of what might be considered a ‘Christmas card’ is a parchment manuscript - ‘King James’s Christmas Card’, discovered in 1979 in the collections of the former Scottish Record Office in Edinburgh. The manuscript was originally presented to King James I of England (VI of Scotland) and his son Henry Frederick, Prince of Wales during the Christmas period of 1611. It incorporated Rosicrucian imagery, with the words of the greeting – "…a gesture of joyful celebration of the Birthday of the Lord, in most joy and fortune, we enter into the new auspicious year 1612" being laid out to form a rose.

It wasn’t until the nineteenth century that the practice of sending cards became widespread. It was the British public servant, Henry Cole (1808-1882), who can lay claim to starting a tradition that has survived 175 years. His name may be familiar to Londoners; he served as the first director of what was to become the Victoria & Albert Museum from 1857 to 1873, and the Henry Cole Wing is named after him. His early career was spent as a sub-commissioner under the Record Commission, where he was employed to transcribe records. In 1838, Cole became one of the four senior assistant-keepers of the newly established Public Record Office (now known as The National Archives). From 1837 to 1840 he worked as an assistant to Rowland Hill and played a key role in the introduction of the Penny Post. The new Post Office was able to offer a cheap penny stamp, thanks to the new railways which could quickly carry much more post than the horse and carriage.

It is said that in 1843 Cole found he was too busy to send his customary Christmas letters to all his friends and acquaintances. Instead, he commissioned his friend, the artist John Callcott Horsley, to design a card for him to send. The illustration depicted three generations of a Victorian family drinking a toast to the recipient over a banner with the greeting “A Merry Christmas and a Happy New Year to you”. One thousand were printed and individually hand-coloured. After Cole had sent his cards, the remaining cards were sold by his business partner Joseph Cundall at his emporium in Bond Street, for the then princely sum of one shilling each. In 2001, one of Cole's cards, (which he had sent to his grandmother), sold at auction for £22,500.

Cole’s card proved popular, (a second batch of 1,000 also sold out) although the design caused a minor outcry as it showed a child being given a glass of wine! The sending of ‘Official’ Christmas cards began with Queen Victoria in the 1840s; the Archive has many examples of the personal greetings sent to members of the Rothschild family by the Royal family over the years. However, for many people cards remained expensive, and it wasn’t until the 1860s when cards could be posted in an unsealed envelope for one halfpenny and improvements in mass printing methods that they became widely popular. At Christmas 1873, the firm Prang and Mayer began creating greeting cards for the popular market in Britain; by the 1880s, the firm was producing over five million cards a year using the chromolithography process of printmaking, for a market that had spread over Europe.  The first ‘charity’ cards were created in Denmark in the early 1900s by a postal worker who thought it would be a good way to raise money. It was a great success: over four million were sold in the first year and the custom spread.

The production of Christmas cards was a profitable business for many stationery manufacturers, with the design of cards continually evolving with changing tastes and printing techniques. Hallmark Cards was established in 1913 by Joyce Hall with the help of her brother Rollie Hall to market their self-produced Christmas cards. The Halls capitalised on a growing desire for more personalised greeting cards, and the First World War increased demand for cards to send to soldiers, many depicting patriotic themes.

Early British cards favoured flowers, fairies and designs that reminded the recipient of the approach of spring. Humorous and sentimental images of children and animals were popular, as were increasingly elaborate shapes, decorations and materials. In the late Victorian period, robins and snow-scenes became popular; robins were chosen as postmen of the day were nicknamed 'Robin Postmen' because of the red uniforms they wore. Snow-scenes and wildlife were popular. Late nineteenth century designs included depictions of the Nativity scene, and later still seasonal figures (Santa Claus, snowmen, and reindeer), and objects associated with Christmas such as candles, holly, baubles, and Christmas trees, and Christmas activities such as shopping, caroling, winter pastimes and socialising became popular. Idiosyncratic ‘studio cards’ with cartoon illustrations and sometimes risqué humour caught on in the 1950s. N M Rothschild & Sons sent its first ‘corporate’ Christmas card in 1956 and over the years designs have featured various depictions of the five arrows, artworks (many still to be found hanging at New Court) and other images associated with the family and business. Today the choice of seasonal images available is astonishing. 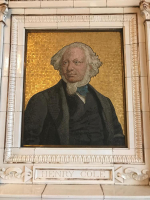