Charles Rothschild was the younger son of Nathaniel, 1st Lord Rothschild (1840-1915) and Emma, Lady Rothschild (1844-1935). He was born on 9 May 1877 and educated at Harrow where he displayed a great talent for entomology. Charles led the London bank from 1918-1923. He had tremendous energy for his many pursuits and occupations, and while the bank at New Court benefited from his practical and systematic approach to the organisation of the firm, his real interests lay outside the financial sphere.

A dedicated naturalist, he met his Hungarian-born wife Rozsika von Wertheimstein (1870-1940) on a butterfly-collecting trip in the Carpathian Mountains. Rozsika was a Hungarian baroness, a descendent of one of the wealthiest Jewish families in Europe. She was born in Navgarad (now the Romanian city of Oradea), the daughter of a retired army officer, Baron Alfred Edler von Wertheimstein. Rozsika, one of seven children, was fierecely intelligent, multi-lingual and a champion lawn tennis player in Hungary.

On the day of their wedding Charles’ uncle, Leopold de Rothschild (1845-1917) wrote to his cousins in Paris “We have just had the pleasure of hearing from our dear brother Nathaniel that everything went off very well and we all unite in wishing every happiness and blessing to Charles and his bride, the marriages of these young people and all others that are soon to come are a great joy to us veterans, who rejoice in the idea and in the fond hope that our family is to prosper and multiply."

Philip de László was born in humble circumstances in Budapest. He was apprenticed at an early age to a photographer while studying art, eventually earning a place at the National Academy of Art, where he studied under Bertalan Székely and Károly Lotz. From 1907, he moved to England and remained based in London for the remainder of his life, although endlessly travelling the world to fulfill commissions. His reputation still remains largely as a society portrait painter, but amongst his sitters were industrialists and scientists, politicians and painters, men and women of letters and many other eminent, as well as ordinary, people. This stunning portrait of Rozsika, which now hangs in the Reading Room of The Rothschild Archive, was gifted to the Trustees of The Rothschild Archive by the estate of the late Dame Miriam Rothschild. 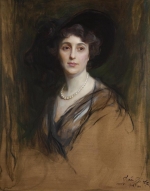 Silver plaque inscribed 'To (Her Ladyship) Baroness Rozsika Rothschild with grateful and enthusiastic thanks from the Hadiker Hussars who hunt on the plain lined with acacia blossom'. It was a gift at Christmas 1936.