One hundred and seventy years ago this February, Mr Benjamin Davidson arrived in Valparaíso, Chile, en route to San Francisco, presenting a ‘Letter of Introduction’ from the London Rothschild bank.

By 1821, the Rothschilds had established their banking houses in Frankfurt, London, Paris, Vienna and Naples. It was crucial that the family should have a representative in each of the places where they were doing business,  and the Rothschilds established a network of agencies, carefully chosen from among their family, friends and intimates. This gave the Rothschilds access to the most up-to-date business, political and social intelligence.

Meyer Davidson (1791-1846) was brother-in-law to Nathan Mayer Rothschild (1777-1836), having married Jessy Barent Cohen (1795-1869), the sister of Nathan's wife, Hannah (1783-1850), in 1816. Working with Nathan at New Court, Meyer was a trusted employee, assisting early on in his career with the purchase and shipment of coin for Wellington's troops during the Napoleonic wars. Three of Meyer's five sons were also to work for the London Rothschild bank, Benjamin Davidson acting as Rothschild agent in San Francisco, and Lionel and Nathaniel Davidson in Mexico.

In 1847, Benjamin Davidson set out to St Petersburg with several boxes of bullion, with the intention of setting up an agency there. A year later as news of California gold strikes reached Europe, he travelled to San Francisco on a journey that was to take him via the West Indies, Panama, Peru, Chile and Mexico. In February 1848, Benjamin Davidson arrived in Valparaíso, Chile, where he presented to the merchant bank of Huth & Co, a ‘Letter of Introduction’ from his employer, Baron Lionel de Rothschild (1808-1879). Frederick Huth was a leading firm in the Latin-American trade, involved in shipping quicksilver (mercury) via Southampton.

The ‘Rothschild’ name opened doors; on 29 February, Huth wrote to New Court: “Messrs N M Rothschild & Sons: - Gentlemen, Mr Benjamin Davidson, the bearer of your letter of introduction, has presented it in person; and we shall have much pleasure in paying him every attention and civility in our power and rendering him whatever services he may require…”

Huth also received from N M Rothschild & Sons credit in favour of Davidson of £3,000 (over £270,000 today) to place at his disposal in either of their houses in Valparaíso and Lima. Whilst in Valparaíso, Davidson received consignments of quicksilver and wrote back to New Court with details of the market in this commodity. Quicksilver, vital to the process of the refining of gold and silver was of particular importance to the Rothschilds in the nineteenth century, yielding considerable profits. By holding the monopoly on quicksilver production (largely based in Spain and Mexico) in the 1830s and 1840s, the Rothschilds were in a commanding position to ensure a key hold on the refining of precious metals worldwide for over a century, until 1922 when the decision was made to terminate their quicksilver business in the face of stiff Italian competition.

Many of Davidson’s letters to New Court tell of the miseries of contemporary travel. He wrote from Lima with details of the journey, promising that he will “not repeat what every one must write of the Life on Board Ship, nor complain of the badness of the accommodation of which people form much too favorable an opinion upon visiting the Steamers at Southampton, particularly when they see the fine repast which is served before starting, and for a repetition of which the Passengers vainly looked forward to when once out at sea.” Davidson finally arrived in San Francisco in 1849 and it was here that he established his agency, writing to London with great enthusiasm about the potential of the American city for business. His letters provided a good impression of life in California at the time. He reported on the local markets for general merchandise, the availability of numerous commodities, emigration to San Francisco, the price of labour, the government's need for loans and the weather, remarking on one occasion that “the market fluctuates with the barometer.” Davidson traded in specie and bullion for the Rothschilds, and invested in a good deal of land on the Rothschilds' account, renting out houses he bought or had built himself, writing of matters concerning construction, the problems of insuring wooden houses, and the cost of land in San Francisco.  In 1850, Benjamin was joined by John May, a clerk from the Frankfurt Rothschild house, possibly as a result of some dissatisfaction felt by London about Davidson's handling of the business, particularly his purchases of property which had an alarming tendency to burn down. In the late 1870s, Gansl and Cullen took over as agents to N M Rothschild & Sons in San Francisco.

Lionel Davidson, Benjamin’s brother, arrived in Mexico in 1843.  Initially working alongside the company of William de Drusina & Co., he began to concentrate on the quicksilver business, and arranged the importation of Spanish quicksilver for use in the Mexican silver mines. Nathaniel Davidson joined his brother in 1852. See Mercury’s agent: Lionel Davidson and the Rothschilds in Mexico in The Rothschild Archive Annual Review 2007-2008 for more information about the Mexican quicksilver business. 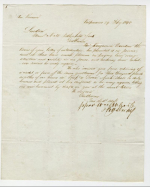 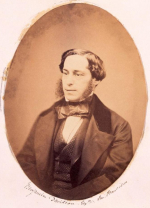