In recent weeks, as the global pandemic continues, the media has highlighted the shocking increasing issue of food poverty in the UK.  One of the charities recently nominated by UK staff through the Rothschild & Co. Community Investment programme to receive support was The Trussell Trust. The Trust, founded in 1997, enables a nationwide network of food banks to provide emergency food and support to those locked in poverty.  They also campaign for change, just as Lionel de Rothschild (1808-1879) did 175 years ago.

Helping to create a hunger-free future from New Court

Lionel de Rothschild was born in London on 22 November 1808, the eldest son and main business heir of Nathan Mayer Rothschild (1777-1836).  He spent time at the University of Göttingen, before embarking on an apprenticeship in the family business in London, Paris and Frankfurt, before being admitted to the family partnership in 1836 at a family gathering in Frankfurt to celebrate his marriage to his cousin, Charlotte.  Nathan's death just days later left Lionel as senior partner in the new firm N M Rothschild & Sons, which he formed with his three brothers, under the watchful eye of their esteemed mother, Hannah.

Alongside his business achievements (including the rebuilding of New Court in the 1860s), Lionel undertook a lengthy campaign to become the first Jewish Member of Parliament, finally taking his seat as Liberal Member for the City of London in 1858. Yet he is perhaps less well remembered for his philanthropic endeavours.

In December 1846, The British Association for the Relief of Extreme Distress in the Remote Parishes of Ireland and Scotland was established, with Lionel de Rothschild at the head.  This was in response to the Great Famine in Ireland, which between 1845 and 1849 resulted in mass starvation, disease, and emigration.  The Great Famine was caused by a failure of the potato crop, which many Irish people relied on for most of their nutrition.  A disease called “late blight” destroyed the potato plants year upon year.  During the famine, an estimated one million people died and a million more emigrated from Ireland, causing the island's population to fall by between 20% and 25%.

To alleviate hardship, the Irish 3% Loan, for £8.9m, was issued by N M Rothschild & Sons with Baring Brothers a year later in 1847. The loan was contracted specifically for the supply of food. Lionel waived all commission. Documents in the collection of The Baring Archive include letters concerning the importation of Indian corn, American grain and other food stuffs into Ireland for famine relief.  Lionel was described by The Times newspaper as being “indefatigable in his exertions.”  In these endeavours, Lionel appears to have been following the good example set by his father some years before. As early as 1821, hearing rumours of an impending famine in Ireland, Nathan Rothschild had alerted Lord Liverpool to the possibility of buying “American and East India Rice before speculators come into the market, the price of which is at present low and the Stock large and which in case of a deficiency of the Potato Crop would supply the numerous Poor of that Country with a wholesome food during the Winter.”

In addition to the loan, a charitable fund was established to which individuals could subscribe. To this this fund the Rothschild family themselves contributed £1,000, the second biggest donation after that of Queen Victoria.  Contemporaries were openly impressed by the Rothschild effort.  It was well known that Lionel personally involved himself in regulating the purchase and shipment of provisions to Ireland and the formation of depots around the country. However, there were those who doubted Lionel’s genuineness, those who believed his actions were a calculated act for political gain. Regretfully no papers of the British Association for the Relief of Extreme Distress in the Remote Parishes of Ireland and Scotland survive in The Rothschild Archive, and very few of Lionel’s papers survive at all - much of his personal and business correspondence was destroyed by his executors (following his wishes) after his death.

Despite the lack of 'official' papers, evidence of Lionel’s sincerity survives in the written words of his family and in the memories of those whose families received assistance. In January 1847 Lionel’s mother, Hannah, wrote to her youngest son Mayer (1818-1874):“I am exceedingly sorry to observe the continued distressing accounts from Ireland and other places. Lionel informed me of the donations given which are very munificent and I pray that the situation of the Poor may soon be ameliorated by a plentiful supply of food and that God Almighty may bestow his usual blessings on these countries which so greatly require his protection. I would willingly say, add my donation from my account if it is necessary which may be thought essential.”

The Association and its good works were Lionel’s reaction to the perceived failings of the British Government of the day.  Louis Hyman, a Dubliner, suggested, “The relief measures taken by an unprepared Government were almost useless and outside aid in which British and American Jews were prominent, was the sole salvation.”  Lionel died at his home at 148 Piccadilly, London, in 1879.

New Court has a long history of being a site for encouraging change and championing those who find themselves in distress, and that tradition continues today. 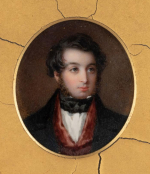 Miniature of Baron Lionel de Rothschild from the Archive collection

An Irish newspaper announces the arrival of the blight in 1845