This month we look at the story behind a New Year card sent to the first Lord Rothschild from the Japanese financier and politician Viscount Takahashi Korekiyo in January 1909.

The card reads: ‘From Baron and Baroness Takahashi. 10, Omote Sanchome, Akasaka, Tokio. With Heartiest Greetings and every Good Wish for your Happiness in the New Year. New Year 1909’

Nathaniel Mayer ('Natty') de Rothschild, 1st Lord Rothschild (1840-1915) took over the senior partnership of the London House from his father who died in 1879. Under Natty, the bank made 70 loans, and was instrumental in establishing the Exploration Company to exploit new mining opportunities in the New World. Natty was an MP, and he became the first Jewish peer in 1885.

Viscount Takahashi Korekiyo (1854-1936) was born in Edo (modern-day Tokyo), and from humble beginnings  quickly rose through the civil service to become vice-president of The Bank of Japan in 1898, president of the Yokohama Specie Bank in 1906, and Governor of the Bank of Japan in 1911. In 1913, he was appointed Minister of Finance by Prime Minister Yamamoto Gonnohyōe and joined the Rikken Seiyūkai political party. After Prime Minister Hara was assassinated in 1921, Takahashi was appointed both Prime Minister and the Rikken Seiyūkai party president; however his term of office was brief, lasting less than seven months. In the Japanese coalition cabinet of 1924, Takahashi became Minister of Agriculture and Commerce, and in later administrations served as Finance Minister. Despite considerable success, his fiscal policies involving reduction of military expenditures created many enemies, and he was among those assassinated by rebelling military officers in the February 26 Incident of 1936.

It was the intention of the Japanese government to issue a major loan in Paris as well as London and the United States in 1905 that first brought Takahashi and the Rothschilds together.  After arriving in London on 1 April, Takahashi met with many of the most important London bankers and financiers of the time, and on 13 April, met with Lord Rothschild and his brother Alfred  at New Court. Although Natty and Takahashi shared a personal respect for one another, relations between Russia and France complicated the negotiations (the Rothschilds were cautious about the business, concerned about the impact on Jews by the Russian Government, and were only prepared to enter into business with Japan after the war had ended), but both the Paris and London Rothschild banks applied considerable skill and diplomacy in order to bring the loan to a successful conclusion.

On 28 November 1905, the first series of the Imperial Japanese Government 4% Sterling bonds went on sale in London, New York, Paris, Hamburg and Berlin; £12 million issued in Paris by a syndicate led by MM de Rothschild Frères and £6.5 million issued in London by a syndicate headed by N M Rothschild & Sons and comprising Parr's Bank, the Hong Kong and Shanghai Banking Corporation and the Yokohama Specie Bank Limited.

In 1907, Yoshio Sakatani, Japanese Minister of Finance, approached Rothschilds for the conversion of the 1905 4% loan.  Once again, negotiations were rendered difficult by diplomatic conflicts, this time between Russia and the United States, and once again Rothschilds in London and Paris were instrumental in smoothing the passage of the loan.  The 1907 5% Imperial Japanese Government loan for £23 million was raised in London and Paris by the same issuing syndicates as the 1905 loan, both headed by the Rothschild banks.

At the conclusion of the 1907 loan, N M Rothschild & Sons received the following telegram from the Japanese Minister of Finance:

See Takahashi Korekiyo, the Rothschilds and the Russo-Japanese War, 1904-1907 in The Rothschild Archive Annual Review 2005-2006 for more information about these loans. The London bank took part in three further loans to Japan in the inter-war period, including in 1926  a loan to raise finance for the reconstruction of Tokyo after a devastating earthquake. 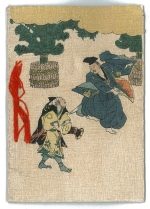 Front of a New Year card from Takahashi to Lord Rothschild 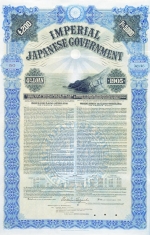