For 150 years, visitors to New Court have been greeted by a large ornamental iron and enamelled sign. Long before the addition of the words ‘New Court’ to the façade of the building, this sign announced to callers that they had indeed arrived at the home of the London Rothschild business.

Nathan arrives in ‘The Lane’

New Court has been the centre of Rothschild business for over 200 years. Nathan Mayer Rothschild, (1777-1836), first moved to New Court in 1809 from Manchester where he had established a branch of his father's Frankfurt merchant house in 1799. Following the death of his father-in-law, the London merchant Levi Barent Cohen, Nathan Rothschild moved to London in 1808 where it was clearly his intention to establish himself as a banker.

In 1809, Nathan Mayer Rothschild acquired the lease of No.2, New Court for £750, as a home for his family and as the centre of his London business interests. St Swithin’s Lane (named after a Saxon Bishop of Winchester, famous for charitable gifts and building churches), was an ideal choice, New Court had an attached warehouse so Nathan could continue his business as a merchant; and was short stroll away from the Bank of England and the Royal Exchange where Nathan would soon make his mark.

The second New Court: a 'palazzo' for business

In 1865, Lionel de Rothschild (1808-1879) who had succeeded his father in the family business decided that the time had come for a new building. A new ‘New Court’ was completed in the style of a grand Italian ‘palazzo’ to the design of Thomas Marsh Nelson. The domestic feel of the old New Court was swept away in favour of a building more imposing and business-like, and the impressive iron and enamel sign was hung over the entrance.

Over the years, ‘The Lane’ has seen many changes. The Wren church of  St Swithin’s which stood at the end of  the lane, facing Cannon Street station, was destroyed in the Blitz in 1941; buildings along the lane have come and gone; in 1956, N M Rothschild and Sons expanded into Chetwynd House across the lane (demolished in 1996), and into the former London Assurance building at 1 King William Street in 1997. New Court itself has been rebuilt three times. Whatever the future holds for St Swithin’s Lane, Rothschild will continue to occupy centre stage.

The New Court Shield incorporates a number of symbols associated with the Rothschild family of Frankfurt, most prominently, five arrows. A clue to the choice of arrows is in the work of Moritz Oppenheim, the ‘painter of the Rothschilds’. A sketch in oils depicts the story told by Plutarch of Scilurus who, on his deathbed, asked his sons to break a bundle of darts. When they all failed, he showed them how easily the arrows could be broken individually, cautioning them that their strength as a family lay in their unity.

The first appearance of arrows representing the Rothschild family was in the Austrian patent for arms of 1817 that placed the brothers on the first rung of the nobility. In 1822, the brothers advanced yet further in the ranks of the Austrian nobility, becoming barons of the Empire. Many members of the family began to adopt the motif of the five arrows. It appears in letterheads, on bookplates, on porcelain, in jewellery and in countless other decorative ways. Although it was purely a matter of personal choice, a cross-channel split of opinion began to develop. The French family and bank gradually adopted 'arrows up' for all uses of the symbol, while the English remained faithful to the 'arrows down' version, although this division of usage has not always been strictly adhered to. 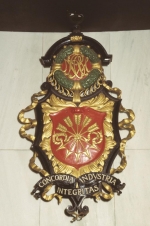 The New Court Shield outside the third New Court.