The collections of The Rothschild Archive include a number of objects and artefacts. Each January, when the Archive is closed for a week during ‘stock-taking’, the Archive team takes the opportunity to review the object collections, checking their condition and cleaning items. Particular attention is paid to the vitrine on the ninth floor of New Court which contains silverware, jewellery, and other objects.

This year we will be replacing some of the items in the vitrine with new displays. One of the items recently rediscovered in the collections is a small wooden box, about 25 cm square, containing samples of precious metals. Its origins are unclear, but it may date from the days of the London bank’s early involvement with the mining and refining of Australian and Californian gold from the 1850s. The box contains four samples of the precious metals that make up a Mexican Piastre, a gold bar from Australia and gold from California, and gives (in French) the precise proportions of gold, silver, copper, platinum, iridium and lead in each of the samples tested. The box may have been given to the Rothschild partners as a gift, or possibly it was made up by the first staff of the Rothschild Royal Mint Refinery, based on tests of gold made at the request of Sir Anthony de Rothschild (1810-1876) the driving force behind the establishment of Refinery. If so, it may be one the earliest surviving relics of this important industrial enterprise.

It was the commanding position in the City of London held by Nathan Mayer Rothschild (1777-1836) as a bullion trader which ensured the fortunes of the English House. Nathan's earliest significant financial successes were in the buying and selling of gold. He was fortunate in having at his disposal sums of money arising from his father's position as trustee Court Agent to the Elector of Hesse-Kassel. With these he was able to seize opportunities to trade gold at a profit, and enabled him to assemble and transport the huge sums of gold coin needed to pay Wellington's forces in the campaign leading to Napoleon's defeat at Waterloo. From 1824 onwards, when Nathan had his first bullion dealings with the Bank of England, making a private arrangement for a loan of gold, he established his credentials as a reputable bullion broker, and in 1825, Nathan saved the Bank of England from a suspension of payments crisis with a large injection of gold. The close relationship between the Rothschilds and the bullion market continued. In 1919 the first setting of gold prices (known as the Gold Fixing) began after the lifting of controls on gold trading after the First World War; this process took place at the offices of N M Rothschild & Sons in from 1919 until 2004.

The first of the gold rushes was in California in 1848. Thousands of men from across the globe descended upon the area. The Rothschilds sent their agent and relative, Benjamin Davidson, to San Francisco where he set up a Rothschild Agency at the end of 1849. This enabled N M Rothschild & Sons to become the major London importer of American gold, and the samples in the box may be associated with some of the earliest Californian gold to arrive in Europe. In 1847, Benjamin Davidson’s son had set out to St Petersburg with several boxes of bullion and his early letters sent to New Court detail the gruelling journey through Europe in the harsh months of February and March. In the following year, Davidson set out on a journey that was to take him to San Francisco, where he arrived at the end of August. Many of Davidson's letters tell of the miseries of travel. He wrote from Lima with details of the journey, promising that he will "not repeat what every one must write of the Life on Board Ship, nor complain of the badness of the accommodation of which people form much too favorable an opinion upon visiting the Steamers at Southampton, particularly when they see the fine repast which is served before starting, and for a repetition of which the Passengers vainly looked forward to when once out at sea.". He wrote back to New Court with great enthusiasm about San Francisco and its potential for business.

Gold was discovered in 1850 in New South Wales. As a result, N M Rothschild & Sons employed a number of agents in Melbourne to supervise the purchase and shipment of gold to London. Here, as in California, the Rothschilds were aided by having relations in the right location at the right time. Correspondence survives in the Archive from Joseph Barrow Montefiore (the Montefiores were related to the Rothschilds through marriage) of Melbourne who sent sent detailed reports of the discovery of gold in Ballarat, declaring he was in "a second California". His report on trade in New South Wales, ‘The Victoria Report’ of 1852, sent to the London Rothschilds, described the rapid growth of the colony and the consequent social upheaval. The impact of the Australian find was even more important than that of California because 80% of the gold came through the London market. In 1899, N M Rothschild & Sons became directly involved in mining, backing the Kalgoorlie Southern Development Company which was created to prospect an area of 192 acres in Western Australia, close to the so-called 'Golden Mile'.

The Rothschilds’ interests in gold refining can be traced to 1827, when James de Rothschild (1792-1868) began operating a refinery in Paris. In 1848 a Royal Commission charged with examining the efficiency of the British Royal Mint recommended the separation of the twin roles of refining and coin striking. A recommendation of the Commission was that a refinery be leased to an external agency of the Royal Mint. The opportunity to manage a refinery in England was enthusiastically seized by Anthony de Rothschild, the second son of Nathan. On 26 January 1852 he wrote from New Court to the Deputy Master of the Mint: “I request you will have the goodness to inform the Master of the Mint that I am ready to execute the Lease for the Refinery, and I should be obliged to you to let me know when you receive the confirmation of the Chancellor of the Exchequer to the conditions of the Lease, in order that the documents relative to it may be completed.” On 3 February the lease of the buildings and equipment was sanctioned by Her Majesty’s Treasury and the Royal Mint Refinery became part of the London business’s interests; the Refinery played a leading role in refining the world’s gold output and the acquisition was particularly timely as new discoveries of Californian and Australian gold brought a flood of new supplies of gold to London. At this time, the most up to date refining process was to be found in France, and the first manager of the Refinery was a Frenchman, Michel Poisat, who was recommended to Anthony de Rothschild by his brother Nathaniel, based in Paris. Poisat supervised the recruitment, in France, of workers for the London business. This may explain why the description of the tests in the wooden sample box are in French; they may even be in the hand of Poisat. A curious perk was provided to the  French refiners; a beer allowance was supplied to the English workmen, but the French were given cider, presumably on the grounds that most of them came from Normandy. The money obtained on the return of the empty casks was divided amongst those who did the drinking, and in 1911, 161 casks raised over £40, which was divided between 28 men, who each received 2s 5d each per month. The Rothschild family retained the lease on the Royal Mint Refinery for well over a century and gold bars refined by Rothschild and stamped with the Rothschild name remain very popular among collectors. 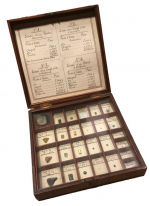 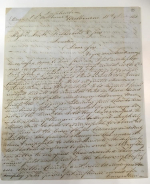 Letter sent to New Court from Jacob Montefiore in December 1851 reporting the discovery of gold at Ballarat and the start of the Australian gold rush: “I was astonished to find I had arrived at a second California producing gold in greater abundance and purity than even that prolific gold region…”