Our first ‘Treasure’ of 2022 is not an object but an event: an exhibition at the Jewish Museum in Vienna about the history of the Austrian branch of the Rothschild family. The exhibition is open to the public until 5 June 2022 and – fittingly for the times – there is much to be discovered online too.

The curators of the exhibition (Dr Gabriele Kohlbauer-Fritz and Tom Juncker) were keen to uncover a largely hidden history and to challenge some of the preconceptions about the Rothschild family. To do this they framed their research and the exhibition’s concept as a detective story, accepting no account or narrative until they had investigated it thoroughly.

As a result of this detective work the exhibition includes a number of artefacts that have been retrieved from various basements where they have been languishing for decades. Among these items are two busts of family members:  Nathaniel von Rothschild (1836-1905) and Bettina von Rothschild (1858-1892). Each of them was discovered in hospitals which the Rothschild family had founded and which were named after them.

Around 140 items, including 30 from the collection of The Rothschild Archive, are on display.  One, a letter (and contract) from Albert von Rothschild (1844-1911) to the Austrian Emperor expressing his intention to establish a women’s hospital in Vienna named after his late wife, Bettina, has long been a favourite of the archivists for many reasons.  It is an object of great beauty; it demonstrates the commitment of the Rothschild family to the well-being of the community; it has endured the most extraordinary fate, having been part of a collection of looted materials which were taken from the family by the Nazis and only returned in 2001 from archives in Moscow.

The exhibition confirms a story that visitors to the Archive have told us over the years when they have seen this item: that the bust of Bettina which you can see on the front page used to be on display in the entrance of the hospital.  It is this bust that the curators recovered from the basement of the hospital building where it had been placed during renovations to the building many years ago.  For the duration of the exhibition the bust and the contract can be seen side by side.

A catalogue accompanying the exhibition featuring articles by curators, archivists and distinguished historians helps to place the Rothschild family history in its wider context.

Treasures from the Archive collection

Among the items from the Archive’s collection that feature in the exhibition four have been the subject of previous Treasure of the Month postings.

Introduction to the Exhibition: Jüdisches Museum Wien (in English)

Introduction to the Exhibition: Jüdisches Museum Wien (in German) 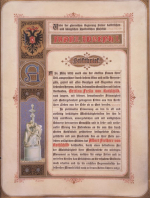 llluminated Contract of 1894 concerning a donation made by Albert von Rothschild (1844-1911) to build a women's hospital in Vienna (to be named the Bettina after his late wife).