Ferdinand James de Rothschild, (1839-1898), the son of Anselm and Charlotte, was born in Paris on 17 December 1839 and educated in Vienna. His mother’s home country of England became his adopted home, even after the tragic death in childbirth of his wife Evelina whom he had married on 7 July 1865.

Waddesdon Manor is perhaps the most well-known of all the great Rothschild houses in England. In 1874 Ferdinand bought “a lovely tract of land, [with] beautiful soil...and very pretty scenery” in the Vale of Aylesbury.  Inspired by the châteaux of the Valois, Ferdinand employed Gabriel-Hippolyte Destailleur to build him his own French-style country house. Destailleur submitted elaborate plans for a vast mansion, nearly twice the length of the house as built, with a ballroom and a winter garden. Ferdinand wanted the scale reduced and a new design was approved, although the architect warned him that ‘one always builds too small’, a mistake Ferdinand later rued.

The ‘Red Book’ is a privately printed album of photographs and an essay by Ferdinand recording the building, interiors, and collections assembled at Waddesdon. The red leather binding has led to the name, the 'Red Book', but its cover is simply inscribed 'Waddesdon'. The Red Book is an important document reflecting Ferdinand's tastes, and the history of collecting and display. It is likely that Ferdinand had the album printed as presents for his friends and family; another copy remains in the collections at Waddesdon. The photographs record the lavish interiors, and the stunning collections of paintings, furniture, carpets and porcelain. Many of these items remain at Waddesdon today. Ferdinand hoped that his ‘labour of love’ would endure - "A future generation may reap the chief benefit of a work which to me has been a labour of love, though I fear that Waddesdon will share the fate of most properties whose owners have no descendants, and fall into decay.  May the day be yet distant when weeds will spread over the gardens, the terraces crumble into dust, the pictures and cabinets cross the Channel or the Atlantic, and the melancholy cry of the night-jar sound from the deserted towers."

Waddesdon was built for entertaining, and opened between May and August for weekend house parties. Ferdinand spared no expense in creating the right atmosphere; twenty-four indoor staff looked after the guests. Electricity was installed in 1889, and this delighted Queen Victoria who requested to have the lights repeatedly turned on and off.

Dorothy de Rothschild (1895-1988), whose husband James de Rothschild (1878-1957) was later to inherit Waddesdon described the lengths that the Rothschilds would go to entertain their guests at the Manor itself and at Eythrope, on the estate:

“I had an old friend at Waddesdon who had  worked for the family for many years. One day I asked him what his first job had been. He said, as a boy of 12, he had been the 'cake-holder'. He explained that on cloudy days, the delectable tea provided at Eythrope for the approaching guests from Waddesdon, would be set out in the dining-room of the Pavilion. Then, just as the landaus were arriving, the weather might change, the sun would shine, and it was realised that the guests might prefer to go up river. Happily the Thames does not pursue a straight course through the meadows, but winds its way. This made it possible for the big iced cakes, the gingersnaps and wafer-thin sandwiches to be whipped off the table and packed into a pony-trap. This would be driven by a colleague straight across the fields to the tea-house at a speed which would enable the tea to beat the approaching launch by a short head. My old friend's task had been to stand in the trap, poised over the cakes, keeping them from over-setting and their fragile icing from damage, as they careered over the rough ground. Angel cakes, he remembered, had been particularly volatile and apt to bounce...”

Tea, coffee or a peach off the wall

A story that has appeared in many books about the Rothschilds and has been attributed to each in turn was, in fact, first told by Prime Minister Asquith after a visit to Waddesdon. It began as soon as the curtains were drawn in the morning. A footman followed by an underling with a trolley would query politely: 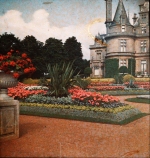 The elegant gardens at Waddesdon