This summer is the 140th anniversary of the Wimbledon Championships, the oldest tennis tournament in the world. Tennis is played by millions of people all over the world, and is enjoyed as a spectator sport.  Both lawn tennis and the older racket sport of real tennis have been enjoyed competitively and as a  leisure interest by members of the Rothschild family.

Several members of the family excelled at tennis: Anthony de Rothschild (1887-1961), Senior Partner, N M Rothschild & Sons between 1942-1960 was a Cambridge Blue. Rozsika Rothschild (née Werteheimstein) (1870-1940) the Hungarian Baroness, who married the naturalist Charles Rothschild (1877-1923) in 1907 had been ladies' champion in Hungary and is credited with having introduced the overhand service into the ladies' game. Later in her life, Jacqueline Piatigorsky (née Rothschild) (1911-2012) of the French Rothschild family won the ladies' doubles of the U.S. Senior Championships, adding mastery of the court to her considerable talents as a chess player.

Real tennis is the original racquet sport from which the modern game of lawn tennis is derived. Real tennis, or ‘jeu de paume’, is believed to have originated in France in the twelfth century, and became very popular across Europe with two notable players being King Henry VIII of England and King Louis X of France. In Victorian England, real tennis had a revival, but broad public interest later shifted to the new, easier outdoor game of lawn tennis, which soon became the more popular sport, and was played by both genders; real tennis players were almost exclusively male. The term real was first used by journalists in the early twentieth century to distinguish the ancient game from modern lawn tennis.

The Rothschild Archive holds several series of receipts for purchases made by members of the Rothschild family. The payments cover every aspect of life: payments relating to property - rents, rebuilding, decorating; personal purchases - clothing, wine, horses; charitable activities and social interests. In the private receipts of Mayer de Rothschild (1818-1874) there is an itemised invoice for ‘E Tompkis & Barre’ for fees for real tennis, including booking of courts, racquet and shoe hire for June-August 1856. The total expenditure in those three months of sport came to £40-4-0, roughly £3,500 today.

Mayer, or 'Muffy' as he was known to his family, was born in New Court on 29 June 1818. He was the first of his family to receive an education at an English university, spending time at both Magdalene and Trinity College Cambridge after a spell at Leipzig and Heidelberg universities. He followed a traditional Rothschild apprenticeship and was the first of the family to commission a truly grand residence, Mentmore Towers in Buckinghamshire. He, his wife, Juliana(1831-1877), whom he had married on 26 June 1850, and their only child, Hannah (1851-1890), took up residence  in 1855. It was a house of lavish entertaining. Visiting it in 1872, Lady Eastlake said that it was "like a fairyland when I entered the great palace, and got at once into the grand hall - 40ft by 50, and about 100ft high -hung with tapestries, floored with parquet and Persian carpets". Mayer died in 1874, leaving Mentmore to his only child, Hannah. Hannah later married Lord Rosebery, and the house remained in the Rosebery family until it was put on the market in 1977. The auction of the contents in the same year was one of the major sales of the century.

Nearly 60 years later, Mayer’s nephew Leopold de Rothschild (1845-1917) continued the family passion for the sport.  Amongst Leopold’s receipts for his Gunnersbury Estate is an itemised invoice for the ‘En Tout Cas Co.,Ltd’, specialists in landscape gardening, garden furniture and ornaments, and tennis courts, 'Grass, Hard and Covered'.  Leopold also had a tennis court in the gardens of  his London residence,  5 Hamilton Place, which had private gardens to the north and west, and from the drawing room windows there were magnificent views of Hyde Park.

It is perhaps no surprise that one of Leopold’s sons excelled at the sport. In a letter written from New Court by his eldest son Lionel de Rothschild (1882-1942) to their French cousins on 7 July 1909, Lionel claimed that the general public were not concerned with international affairs, “they are more interested in Mrs Cornwallis West's play, which they do not think good, and in the tennis match in which my brother Anthony is upholding the honour of his University against Oxford.” The Cambridge University Lawn Tennis Club (CULTC) in England is one of the oldest lawn tennis clubs in the world, founded in 1881, and historically has had more victories than their rivals at Oxford, and boasts many Wimbledon Champions. 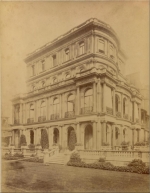 Hamilton Place - the London residence of Leopold de Rothschild (1845-1917). The tennis court can be seen in the bottom left-hand corner 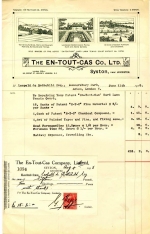 Bill for repairs to tennis courts at Gunnersbury Park 1915