As we once again prepare to welcome our summer graduates and interns, we look back upon the fine tradition of training and apprenticeship in the Rothschild businesses.

On 4 June 1831, James de Rothschild (1792-1868), founder of the French business wrote to his brother Nathan (1777-1836) in London, of the arrival in Paris of the latter’s son Nathaniel (1812-1870).  Writing in Judendeutsch, (German written in Hebrew script) the language of the Frankfurt Jewish ghetto where the brothers had been educated, James commends the young man to his father:

“My dear and good brother Nathan,

I am in receipt of your dear letter of the 2nd and am delighted with your letter.  With God's help, everything is proceeding very well and now we must have patience…

Your Nathaniel is here with us, working at the office and is a very nice boy.  If you wish, I will keep him here with me for a year, just like any other apprentice, to enable him to learn how to keep the books in order, and I can guarantee you that, if he is prepared to listen, he will become the most skilful of all…

It was not unusual for Rothschild sons to spend time in the various Rothschild businesses across Europe to learn their trade.  The nineteen-year old Nathaniel appears to have made a very good impression on his uncle James.  The serious offer of a one year apprenticeship was a legally binding matter; under the contract made between James and his nephew, Nathaniel was bound by agreement to work for his uncle for a specific time in return for instruction in the family trade.  In England, the idea of the apprentice had originated in the Middle Ages and was closely linked to the Guilds of craftsmen, many of which still survive today. As time passed, new laws and statutes were introduced to protect and regulate apprenticeships.  To offer an apprenticeship was not a light decision, and for Nathaniel, this decision, made between his father and uncle, would shape the rest of his life.

Nathaniel was the third son of Nathan and his wife, Hannah Barent Cohen (1783-1850). Known to the family as 'Nat', he was born at New Court, St Swithin’s Lane on 2 July 1812, as his father was working to establish the London bank.  He had spent time with his brother Anthony (1810-1876) at Strasbourg University, before commencing his apprenticeship in Paris. In doing so, he gained not only insight into the family trade, and the ‘Rothschild’ way of doing business, but also a wife; in 1842 he married his French cousin Charlotte (1825-1899), James’ only daughter, and thereafter spent most of his adult life in Paris helping his uncle run the business, de Rothschild Frères. He would become known as 'a financier and a philanthropist by profession'.

Throughout his working life Nat would have known the headquarters of de Rothschild Frères at 19 rue Laffitte, situated in the richest and most modern part of Paris. His uncle James' lifestyle began to reflect the high social position he had attained as founder of the French Rothschild bank and his reconstructions of the building in 1836 attracted the approval of his family.  With its seven gilded salons and luxurious interiors the house aroused general admiration.  The poet Heine described it as the Versailles of a financial potentate.  It was the perfect setting for the many soirées James held there each week.  As many as sixty guests regularly sat down to dinner, among whom were numerous figures from the artistic community, such as Balzac and Heine, Liszt, Puccini and Meyerbeer, while Rossini wrote music for his parties and Ingres painted a portrait of James’s wife, Betty, there.  No doubt Nat was present on many occasions, continuing to learn about the importance of networking from his uncle.

In private, Nat and Charlotte lived firstly in a house in the rue Taitbout and from 1856 at 33 rue du Faubourg Sainte-Honoré, where he indulged his passions for old master paintings, eighteenth century furniture, books and manuscripts.  In 1853 he purchased Château Brane Mouton, an excellent first-growth vineyard, in the parish of Pauillac and the district of Médoc in Bordeaux.  He wished to entertain his guests in Paris with his own great wine and renamed the estate Château Mouton Rothschild.  Not to be outdone by his son-in-law, in 1868, James secured the neighbouring Château Lafite, one of the four great premier cru estates of France.  In 1973, 120 years after Nat purchased Château Mouton Rothschild it joined Lafite as a premier cru, two of the world’s finest wines side by side on the slopes of Pauillac.

Like his brothers, Nat was a regular hunter, but a riding accident left him half-paralysed for the last 15 years of his life.  In spite of serious disabilities, including virtual blindness, he continued to play a respected role in the business, having letters and papers read aloud to him by a secretary and dictating letters to London almost daily.  Nat was a focal point for family visitors, and the younger generations were actively encouraged to seek his wisdom. Nat’s cousin, another Charlotte (1819-1884), instructed her son Leopold (1845-1917) in 1861 “I trust you will not fail to call upon Baroness James at Boulogne, pay your respects to the Baron at the bureau and a long visit to Uncle Nat, who you know, likes to hear all the London news, and many little details… ”

In 1870, Nat died aged 58, leaving his widow Charlotte and their surviving children James Edouard (1844-1881) and Arthur (1851-1903).  His grandson, Henri de Rothschild (1872-1947), recalled tales of his grandfather’s high moral qualities, his kindliness and affability.  To an enquirer who asked how he might become more like the Baron, Nat had apparently once replied, "Philanthropy is a skill that you have to learn young; you would not know how to begin." 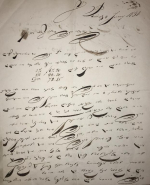 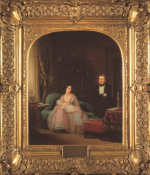