As we enter the Summer party season we look back to one of the most spectacular social events held in Victorian Britain - the famous Devonshire House Ball of 1897, an elaborate costumed pageant hosted by the Duke and Duchess of Devonshire to celebrate Queen Victoria’s Diamond Jubilee.

On 2 July 1897 the Devonshire House Ball, one of the most anticipated social events of the London Season took place at Devonshire House in Piccadilly. Although the Queen herself did not attend, many prominent royals, aristocrats, and society figures did, including members of the Rothschild family. Britain was at the height of its imperial power, and Queen Victoria was held in great reverence by the nation.  The celebrations reflected a country bursting with patriotic pride. An invitation confirmed membership of the ‘smart set’, and was much sought after.

The Duke and Duchess of Devonshire

The hosts of the ball were Spencer Compton Cavendish, 8th Duke of Devonshire and his German born wife Louise. The 8th Duke was a politician; as Marquess of Hartington he served as a Member of Parliament and a cabinet minister as a member of the Liberal Party, the same party that Nathaniel, 1st Lord Rothschild (1840-1915) and his son Walter Rothschild (1868-1937) represented at Westminster. The Devonshires and the Rothschilds were also close personal close friends of the Prince and Princess of Wales. The main driving force behind the ball was the Duchess, who had gained a reputation for being a skilled political hostess. As Duchess of Devonshire, she was chatelaine of seven houses, including the magnificent Chatsworth House, and had large funds at her disposal which meant that she could entertain on a lavish scale. Her guest list was always eclectic and came from different political parties and social classes; the Devonshires issued more than 700 invitations to their costume ball, which were sent out a month before the event.

Fancy dress balls had been held since the sixteenth century, and costumed masked balls spread across Europe from Venice. During the eighteenth century, they became popular at the various royal courts, especially in France. Queen Victoria and Prince Albert threw three lavish themed costume balls during the 1840s and 1850s, and dressing up in historical costume to present a 'tableau vivant' became a respectable amusement.

For the Devonshire House Ball, the dress code was “allegorical or historical costumes before 1815”. This was an encouragement to the guests to give their imaginations full rein for their costumes and, since it was the main subject of interest that season, everyone wanted to have the fun of keeping their outfits a secret while at the same time trying to discover what others were wearing. Guests were instructed to dress around the theme of certain courts, both mythical and temporal.  On the day the costumes ranged from goddesses, figures from paintings, and historical kings and queens, including the court of Elizabeth I, Queen Guinevere & the Knights of the Round Table, the court of Louis XV and Louis XVI of France and the court of Catherine the Great of Russia. Many guests took much time and effort with their costumes, and due to the popularity of fancy dress balls, there was a plethora of books and specialist hire shops on hand to offer advice. More than one guest, in their desire for accuracy (and to stand out) suffered through the evening with uncomfortable headdresses and props.

It was said that one guest who wore an Oriental dress wanted to make an entrance via an elephant and enquired London Zoo about the possibility of borrowing one. The zoo authorities however refused on the grounds that the elephant would be unable to cope with the crowds and traffic of London.

On the night of the ball, the guests were greeted by Louise herself and her costume was described by The Times in great detail:  “The Duchess of Devonshire, as Zenobia, Queen of Palmyra, wore a magnificent costume. The skirt of gold tissue was embroidered all over in a star-like design in emeralds, sapphires, diamonds, and other jewels outlined with gold… the train, which was attached to the shoulders by two slender points and was fastened at the waist with a large diamond ornament, was a green velvet of a lovely shade, and was superbly embroidered in Oriental designs introducing the lotus flower in rubies, sapphires, amethysts, emeralds, and diamonds… a gold crown incrusted (sic) with emeralds, diamonds, and rubies, with a diamond drop at each curved end and two upstanding white ostrich feathers in the middle, and round the front festoons of pearls with a large pear shaped pearl in the centre falling on the forehead.”

To mark the importance of the magnificent affair, the London photographic firm Lafayette was invited to take studio-style photographs of the guests in their costumes; it was intended that a volume be published to mark the event.  A tent was erected in the gardens of Devonshire House, but due to the complexity of their costumes and the complicated procedure of replacing the glass plate negatives in the camera, there simply was not enough time to capture all the guests.

The passing of an era

The turn of the century brought with it momentous changes to society and governance of the country.  Queen Victoria died on 22 January 1901 after nearly 64 years on the throne, and the new King, Edward VII was to steer the country into a new era. Outwardly, the ball can be seen as the pinnacle of aristocratic dominance both in the political and social scene. The presence of men and women whose origins and occupation would have barred them from other aristocratic homes but who were invited to the Devonshire House Ball reflected the gradual changes happening in a society less clearly defined than it had been twenty years before. The Devonshire House Ball of 1897 was the last of its kind, and the last major event held at Devonshire House, but its remarkable spectacle can be glimpsed in the photographs that hold the event frozen in time.

RAL 000/2509 prints of members of the English Rothschild family in costume for the Devonshire House Ball, 1897, published in 1899. 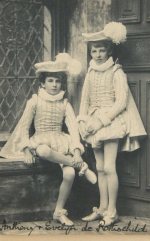