This month we explore not a single object, but a whole collection. The Baroness de Koenigswarter Jazz Musicians Photograph Collection pays homage to some of the finest jazz musicians and singers of the twentieth century, celebrating their talent, creativity, spirt and diversity. Join us as we enter the after-dark world of New York’s thrilling jazz scene, with a Rothschild Baroness as our guide.

“Jazz is not just music, it’s a way of life, a way of being, a way of thinking” Nina Simone

“Jazz is Freedom. You think about that.” Thelonious Monk

With its unique expression, powerful music, and passion, jazz is one of the greatest gifts of American culture to the entire world. There are various components of jazz including Ragtime, New Orleans Jazz, Swing, Bop, Be-bop, and Blues. Away from the boundaries of race and religion, jazz music has been whole-heartedly welcomed by people around the globe.

Jazz is believed to have originated as a blend of musical traditions in the entertaining city of New Orleans, developing from slave songs, brass bands, sorrow songs and spirituals whose harmony and rhythm were mostly African. The most salient feature of this form of music is improvisation. It compels jazz musicians to be creative and invent on the spot in order to express themselves. Even if you aren’t much of a jazz freak, you will be mesmerized by the skills and the tunes of jazz music. “Jazz music is the power of now. There’s no script. It’s conversation. The emotion is given to you by musicians as they make split-second decisions to fulfil what they feel the moment requires.”

Kathleen Annie Pannonica Rothschild (1913-1988), known as 'Nica', was born in London, the youngest child of Charles (1877-1923) and Rozsika Rothschild (1870-1940). She was born into an elite society of privilege, a world away from the excitement and drama of New York where she would eventually make her home. Her childhood was spent in the grand Rothschild mansions in the Vale of Aylesbury, where "The blinds and curtains drawn to protect the art, the panelling and drapes creating a deadening effect. These were houses that killed noise, even the noise of children." Perhaps her early years in this gilded cage were too refined, a suffocating straitjacket of duty and expectation, from which Nica was to rebel.

She studied art in London, Paris and Vienna, before marrying the French diplomat Baron Jules de Koenigswarter in 1935, and settling in France. In 1940 she joined the Free French Forces and was assigned to take medical supplies to West Africa; she then served as a decoder in French Intelligence as well as a broadcaster for a Free French radio station and an ambulance driver for the 1st Free French Division in Egypt and North Africa.

Nica was passionate about music, especially jazz. This passion was to irrecoverably change the course of her life. Jazz legend has it that on her way to the airport after a visit to New York in 1948, she stopped to visit a friend, the jazz pianist Teddy Wilson, who played her a recording of ‘Round Midnight’ by a then unknown jazz pianist, Thelonious Monk. Instantly captivated by his genius, she listened to it twenty times in a row and was bewitched. She moved into a suite at the Stanhope hotel and set about trying to meet the man who had made this extraordinary record. In 1954 they finally met in Paris.

Settling in New York in an apartment rumoured to contain over 300 cats, Nica became a great patron of jazz, actively supporting some of its greatest musicians, and was often to be seen about town in her infamous pale blue Bentley. She wrote a number of important articles about jazz, became a member of the Musicians' Union. Her great knowledge of jazz and her unstinting efforts on behalf of its musicians earned her admiration world-wide. Musicians dedicated over twenty compositions, many classics, to the woman they knew as 'the Jazz Baroness'.

Over a period of thirty years, Nica amassed a collection of intimate colour polaroid photographs (many taken by her) of jazz musicians, friends and acquaintances. The images are strikingly engaging. Many are casual, informal shots of musicians and friends partying, relaxing, composing and playing. They vividly capture the immediacy and rawness of the creative process. Above all, many of the images impart a sense of real joy and zest for life.
Most of the images were published in the book, Three Wishes: an intimate look at the Jazz Greats (Harry N. Abrams, New York, 2006), before being framed for the exhibition Pannonica de Koenigswarter: Jazz Musicians and Their Three Wishes, held in October 2008 at the Gallery at Hermès in New York. Through a single deposit by the children of the late Baroness de Koenigswarter, The Rothschild Archive now holds the collection of original framed polaroids, a total of 284 individual photographs mounted in 207 frames.

“If you have to ask what jazz is, you’ll never know” Louis Armstrong

“Jazz washes away the dust of everyday life” Art Blakey

Louis Armstrong said “The memory of things gone is important to a jazz musician. Things like old folks singing in the moonlight in the back yard on a hot night, or something said long ago.” Archives keep memory alive, and The Rothschild Archive is honoured to be the custodian of this important collection of a remarkable woman, “a Rothschild by birth, a Baroness by marriage and a rebel by choice.” 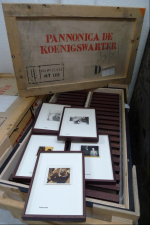 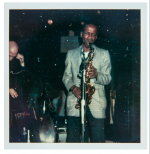