The Rothschilds’ successes and conduct within the Sport of Kings helped strengthen their position in a society where Jewish members could often count on an uphill struggle for acceptance. This jockey’s cap by Hermès of Paris is believed to have been worn by jockeys riding the horses of James Armand de Rothschild (1878-1957).

The English Rothschilds began to own race horses from the late 1830s. The sons of the founder of the London bank, Nathan Mayer Rothschild (1777-1836) were keen riders with hounds, having been encouraged by their mother to take up an active pastime to compensate for the hours spent indoors at the bank. The move from hunting to racing was a natural one, demonstrating the family’s social pretensions as at this time the pre-eminent race-horse owner in England was the Prince of Wales.

It was the youngest of Nathan’s sons, Mayer Amschel (1818-1874), who became an avid racing enthusiast. In 1843 he registered the Rothschild racing colours of dark blue and yellow, and began to train his horses under John Scott at Russley Park in Berkshire. Mayer established a stud farm at Crafton, near his country estate of Mentmore, and in 1871, his mare Hannah won the Oaks, the Thousand Guineas and the St Leger, and Favonius won the Derby. It famously became known as ‘The Baron’s Year.'

Leopold de Rothschild (1845-1917), Mayer’s nephew had become a keen race-goer during his college days at Cambridge. The more desperately his mother urged him to study ‘something – drawing, painting, music, languages’ – the more his interests turned to the turf. Leopold inherited Palace House in Newmarket, where the Prince of Wales often stayed with him during race meetings. Leopold  also took over the running of his father’s stud at Gunnersbury before moving it to his own estate at Ascott. It became the Southcourt Stud farm, from where he bred many winners, notably, Sir Bevys, with which he won the 1879 Epsom Derby  and St Amant, who rode to a famous victory at the 1904 Derby. Read more about St Amant here »

In the twentieth century, Sir Evelyn de Rothschild is an owner of thoroughbred racehorses, and a former chairman of United Racecourses. The late Mrs Renée Robeson, (née de Rothschild) (1927-2015) was a popular and successful owner and trainer of racehorses from her farm and stud at Tyringham, Newport Pagnell, Buckinghamshire.

The French family began to race horses as early as 1835 when James de Rothschild (1792-1868) created racing stables at his Ferrières estate. Still in existence, now relocated to Normandy, the Rothschild stables are one of the oldest in France.  James's horse Drummer won the Grand Prix Royal in 1844, and the Prix du Jockey Club in 1846 was won by Médon. In 1868, brothers Alphonse (1827-1905) and Gustave (1829-1911) succeeded their father as joint-owners of the stables, and in 1879 they established a stud farm at Meautry in Normandy, where the stud remains today. From the very start Meautry established itself as one of France’s top breeding farms with winners such as Heaume and Le Roi Soleil.

Alphonse’s son Edouard (1868-1949) shared his father’s passion for horses and built a new mansion, Sans Souci bordering the training runs at Chantilly. Among the many winners bred and raced by Edouard was Brantôme, a colt who won the French Triple Crown and the coveted Arc de Triomphe and was featured in a short film, Brantôme: Invincible Horse which was played in French cinemas. When Brantôme died, the newspaper headlines announced: “Brantôme de Rothschild is dead.”

The Austrian Rothschild family were also keen race-goers and thoroughbred owners. The three brothers Alphonse (1878-1942), Louis (1882-1955) and Eugène (1884-1976) were all members of the Austrian Jockey Club and Alphonse also had links with the Hungarian Jockey Club based in Budapest. The family were regular attendees at Vienna race meetings, and managed studs at their country estates.

For more information see The Racing Rothschilds: the sportsmen, the maverick and the legend in The Rothschild Archive Annual Review 2008-2009 » 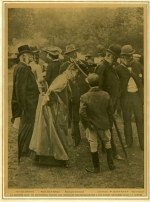