The London house has a long history of involvement in Brazil dating back to the early nineteenth century; there are letters from Brazil in the archive dating from 1812. The London bank carried out merchant banking activities for firms based in Brazil or having business in Brazil, and accepted bills of exchange, traded in specie and bullion, and arranged shipment and insurance of goods. From the mid-nineteenth century onwards more of the London bank's business in Brazil was with the government, and Rothschild was pre-eminent in raising capital for the Brazilian government on the London market.

The price of independence

In 1500 the navigator Pedro Cabral arrived in Brazil, heralding 300 years of governorship of the country by Portugal as one of its overseas colonies.  The crown prince of Portugal, based in Rio de Janeiro since fleeing Napoleon’s army in 1808, declared Brazil independent in 1822 and was crowned Emperor Pedro I in December of that year. Brazil secured recognition from Portugal in 1825 following negotiations brokered by Great Britain. Part of the price of independence was that Brazil should take over repayment of the principal and interest on a loan of £1,500,000 made to the Portuguese government in 1823.  This arrangement was managed through the offices of N M Rothschild, the London bank founded by Nathan Mayer Rothschild (1777-1836), the  debt of 1823 finally being paid off through a further loan to the Brazilian government in 1852.

N M Rothschild & Sons were made financial agents to the Brazilian government in 1855.  They carried out banking functions for the government, handled sales and purchases in Britain, and were at the forefront of the business of raising government loans. They acted as agents for the Brazilian loans, selling bonds for commission rather than providing their own capital.  In order for Brazil to maintain a creditworthy appearance to prospective bondholders in Europe, the bank would advise the government on aspects of its policy and carry out an early form of public relations on its behalf. Between 1852 and 1914 the bank issued loans for Brazil totalling £142,000,000. After the First World War the relationship between the Brazilian government and the bank became less exclusive and the bank often worked in syndication with other firms.  Nevertheless between 1918 and 1939 the bank was involved in loans toBraziltotalling £45,500,000.

Nathan Rothschild in London, although otherwise cautious about South American investments, took an early interest in the new state. He was probably considering a loan to Brazil as early as 1823, but the first loan in 1824 was managed by a group of smaller contractors consisting of Baylett, Farquhar & Co., Alexander & Co. and Wilson, Shaw & Co.  Nathan may well have discretely supported this group, because in 1825 he managed a second, larger, tranche of the loan, amounting to £2,000,000, an expression of confidence in the young nation which was at that time commencing its separate existence. The loan was secured on customs revenues. Nathan’s signature, together with that of Benjamin Cohen (1789-1867), his brother-in-law,can be seen on surviving scrip confirming first instalment received and promising Bonds for the amount stated upon payment of the final instalment. When the South American speculative bubble burst at the end of the 1820s, Brazil managed to preserve a degree of solvency. This was in large part due to Nathan’s financial innovation in raising a loan of £400,000 in 1829 specifically to service Brazil’s existing debts. This bond is thought to be the first of its kind.

The Rothschilds had been involved in the development of railways around the world andBrazilwas no exception.  As early as 1858 they issued their first loans to Brazilian railway companies, the Bahia and San Francisco Railway Company and the Don Pedro Segundo Railway Company, followed by the Sao Paulo (Brazilian) Railway Company in 1859.  Further loans were issued to these companies over the years, and the Western of Minas Railroad was added to their number in 1893. The railways opened up Brazil’s interior: immigrants poured in and coffee planting expanded enormously. The Brazilian government had provided guarantees for these loans in order to support the country’s development, but by the early twentieth century, Brazil’s financial difficulties were such that the government had to effect a type of nationalisation to rescue the railways. Railway Guarantees Rescission Bonds were issued between 1901 and 1905 to fund this process.

Coffee was the major product of Brazil, but the quadrupling of production in São Paulo state between 1870 and 1900, stimulated in large part by the growth of the railways, was the beginning of decades of problems with excessive supply.  A number of loans made to Brazil and São Paulo state were secured in various ways on coffee.  An 8% loan of £2,000,000 made to São Paulo state in 1921 was secured by a tax on the export of coffee; a 7½% loan to the federal government in 1922 of £9,000,000 was secured on the sale of stockpiled coffee, as was a 7% loan to São Paulo state in 1930 designed to assist in the liquidation of the stockpiles, when the policy was finally abandoned. 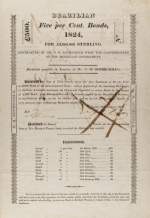